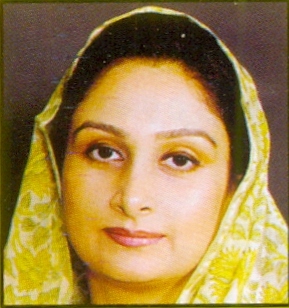 Harsimrat Kaur Badal (born July 25, 1966) is the Union Cabinet Minister of Food Processing in the Government of India and member of parliament from Bathinda. She functioned as Minister of Food Processing during 2014-19. In May 2019 Lok Sabha elections, she was re-elected as MP and was appointed Minister having same portfolio by Prime Minister Narendra Modi. She is a member of Shiromani Akali Dal. She is the wife of deputy chief minister of Punjab Sukhbir Singh Badal.

Badal was born on July 25, 1966 to Satyajit and Sukhmanjus Majithiahas in Delhi. She is a matriculate and holds a diploma in textile design. She is the sister of Bikram Singh Majithia, an Akali MLA from Majitha. She got married to Sukhbir Singh Badal on November 21, 1991, and thus is the Daughter-in-law of Punjab CM Parkash Singh Badal. The couple have 2 daughters and a son.

Harsimrat started her political career with the Indian general election, 2009. She was elected to the 15th Lok Sabha from the Bhatinda constituency after defeating Congress candidate Raninder Singh by 120960 votes.[ Her first speech was on December 3, 2009, where she expressed her concern about the victims and survivors of the 1984 Sikh riots. She has started a project named "Nanhi Chhan" ( means innocent lifes), a movement to save girl child and trees. At present she is the union minister for food processing in the Government of India.