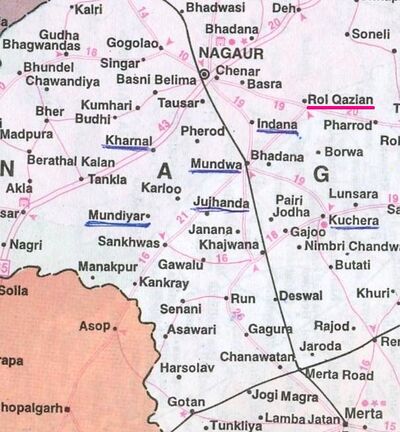 Location of Harsolao to north of Gotan in Nagaur district

Harsolav or Harsolao (हरसोलाव) is a large village in Merta tehsil of Nagaur district, Rajasthan.

This village is situated on Gotan-Jodhpur road. Pincode of the village is 342902. It is located 44km away from Merta town and 75km away from Nagaur city. Gotan railway station is 8 km away from this village. Being a large village, Harsolao has its own gram panchayat. Sangva Ki Dhani, Karwasaron Ki Dhani and Rol Chandawata are some of the neighbouring villages.

It is believed that this village is about seven centuries old. It has an old fort, a Ganesha temple, a Jain Mandir & a cenotaph of Ramchandra Gurjar which is worth a visit. There are ruins of ancient buildings. In the building one can seen beautiful stone carvings. Shri Har Chand Karwasra of the village is known for fight against Jagirdars. Pipaliya Bara of Karwasra Jats is a famous place where there are chhatris of their ancestors.

Thus, there are 125 families of Jats in all.