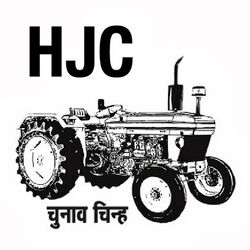 Haryana Janhit Congress (HJC) was a state political party in the state of Haryana India. It was started as a breakaway faction of the Indian National Congress by former Haryana Chief Minister Bhajan Lal in 2007. Later Lal tried to form an alliance with BJP but did not succeed. Finally, the HJC had to fight election alone.

On 28th April, 2016, the party merged with Indian National Congress.

In 2014, the party aligned itself with the BJP-led NDA to fight the general election in 2014. The HJC won the Hisar by-poll. In the 2014 general election, HJC chief Kuldeep Bisnoi lost to Dushyant Chautala in the same parliamentary constituency.

In August 2014, Bishnoi broke the alliance with BJP and joined hands with the Venod Sharma led Haryana Jan Chetna Party for the assembly elections in Haryana.

Haryana Janhit Congress (HJC) led by Kuldeep Bishnoi on 28th April 2016 merged with Congress. Vishnoi and his wife were all the two MLAs of the party in Haryana assembly (2014-19). The merger, took place in the presence of Congress chief Sonia Gandhi and vice president Rahul Gandhi.