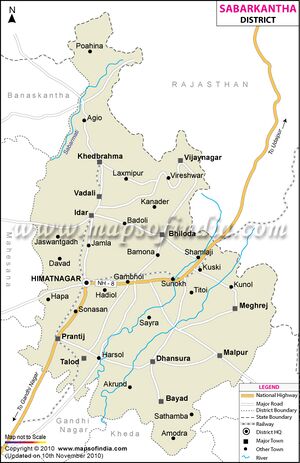 Idar (इडर) is a town in Sabarkantha district, Gujarat, India. It is known for its temples and various architectural monuments on hill, and its historical background. Idar is at the southern end of the Aravalli Range.

Historically named, Ilvadurg which means the fortress of Ilvan, the name later corrupted into Idar.[1][2] It was mentioned in Padma Purana as well as in the Mahabharata as Ila.[3]

The town is mentioned in Mahabharata and Bhavishottar Puran as 'Ilvadurg'. The exact date of its origin is not known; but it is believed that it came into existence at the time when Yudhishthira was ruling over Hastinapur at the end of the Kurukshetra War of Mahabharata.[4]

According to tradition, Idar has been celebrated from the earliest times. Even in the past cycle, yuga, it was known, and in the present cycle, before the days of Vikram, the legendary king Veni Vachh Raj ruled at Idar, the possessor of a golden figure which helped him to build the hillfort and its reservoirs. His queen was a Nagputri, the daughter of a snake-king of the under world, whither, the legend says, she and her consort betook themselves when the queen found that men were mortal.[5]

The first clear tradition shows Idar in the possession of Bhils. After the fall of Vallabhi in 770, Kamalavati or Pushpavati, one of the wives of Maitraka king Shiladitya was at Ambaji to fulfil a vow. She heard news and took refuge in a cave in the mountains and there gave birth to a son called Gruhaditya or 'Goha' or cave-born.[6] Making over the child to a Brahmin woman, the queen followed her husband through the fire. The young prince, of a daring character and adventurous spirit, soon passed out of his guardian's hands, and joining the Idar Bhils was by them chosen king. Whether in sport or earnest, the election was real, and for several generations his successors ruled in Idar. At last Nagaditya or Aparajita the eighth prince was killed by his subjects. He left a son named Bappa Rawal who never succeeded to his father's chiefship, but became the founder of Mewar dynasty.[7]

The Chinese pilgrim Xuanzang (640) mentions a place which he calls O-clia-li, the Chinese way of writing Vadali, a village nearby. British General Cunningham identified this place with Idar. He further noted that in the eleventh century Vadali or Vadari was the capital of a family of chiefs claiming descent from Raja Bhara Gupta, whom the General believed to be the same as the above-mentioned Bappa.

According to tradition, Idar was refounded by Parihars, who, subject to Chittor, ruled there for several generations. Towards the close of the twelfth century, the Idar chief took part with Prithviraj Chauhan, king of Delhi, against the Ghurid Sultanate and was killed in the Battles of Tarain (1192). Idar then fell into the hands of a Koli king named Hathi Sora who was succeeded by his son Samalio. The latter was killed by a Rathod prince named Sonangji, who took occupied Idar, and became the founder of the dynasty of the Raos who ruled there for several generations. After numerous changes of fortune and many struggles with the Muslims, the Raos had at last to leave Idar, and were, in 1728, succeeded by the Rathod dynasty from Marwar.[8]

Raja Anand Singh, with the help of his brother Rai Singh and a few horseman from Palanpur and the Kolis of Gadhwara, he established himself in Idar without difficulty in 1728 or 1729. He died in 1753. Then Maharaja Rajendra Singh became the ruler of princely state of Idar.[9] In 1924 it was made part of the Western India States Agency. It was transferred to the Rajputana states in the early 1940s. In 1949 it was dissolved and split between Sabarkantha and Mehsana districts which were at that point in Bombay State.[10] Both these districts became part of Gujarat when it was formed in 1960.

Adi Parva, Mahabharata/Book I Chapter 70 mentions the Genealogy of Daksha, Manu, Bharata, Ruru, Puru, Ajamidha, Yadava, Kuru. Ila (इला) is mentioned as eighth daughter of Manu in Mahabharata (I.70.13,14). [12]....And Manu begat ten other children named Vena, Dhrishnu, Narishyanta, Nabhaga, Ikshvaku, Karusha, Saryati, the eighth, a daughter named Ila, Prishadhru the ninth, and Nabhagarishta, the tenth. They all betook themselves to the practices of Kshatriyas. Besides these, Manu had fifty other sons on Earth. But we heard that they all perished, quarrelling with one another. The learned Pururavas was born of Ila. It hath been heard by us that Ila was both his mother and father.