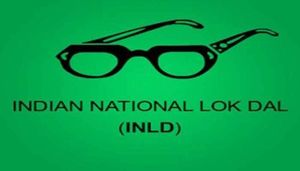 Indian National Lok Dal (INLD) is a political party in India, in the state of Haryana. INLD was founded in October 1996 as Haryana Lok Dal (Rashtriya) by Choudhary Devi Lal, who served as Deputy Prime Minister of India in the V.P. Singh's V. P. Singh ministry Cabinet and List of Chief Ministers of Haryana|Chief Minister of Haryana twice. His son Om Prakash Chautala is the president.

Chaudhary Devi Lal founded the Bharatiya Lok Dal in 1974 after winning the election from Rori constituency to the Haryana Legislative assembly|Legislative Assembly, while the INLD was founded in the year 1987 after assembly election. The 1982 and 1987 elections were fought under the name Lok Dal (LKD). The party renamed into its current name in 1998. The party was a member of the National Democratic Alliance (India) (NDA), and thus part of the Bharatiya Janata Party led government from 1998 to 2004 at the Federal level.

In the Lok Sabha elections 1999, the INLD had an electoral alliance with BJP in Haryana. Each party contested five of the ten seats in the state. All ten were elected.

In 2000, Chautala was elected as the Chief Minister of Haryana for the fifth time. In the 2000 state assembly elections, INLD won 47 out of the 90 seats. Later, INLD broke its alliance with the BJP and left the NDA and the government.

However, in the 2005 Haryana state assembly elections, INLD lost its majority, winning just 9 out of the 90 seats compared to the Congress party's 67 seats. In 2009, the INLD won 31 seats.

On 16 January 2013, Om Prakash Chautala and Ajay Chautala were sent jail after a New Delhi court sentenced them to ten years imprisonment under various provisions of the IPC and the Prevention of Corruption Act.

In Rohtak at Chhotu Ram Stadium, INLD made the Guinness World Records for having supporters apply for 10,450 eye donations in 8 hours.

Jannayak Janta Party emerged from a split in the Indian National Lok Dal (INLD) which itself had been caused by infighting among the Chautala family. An INLD rally at Gohana in October 2018 had seen heckling of Abhay Chautala, a son of INLD leader Om Prakash Chautala for which Dushyant Chautala, a grandson, and his younger brother, Digvijay Chautala, were blamed.

The JJP was formally launched at a rally in Jind in December 2018 by Dushyant Chautala who held a seat in the Lok Sabha of the national Parliament of India, from when he was an INLD member.

For 2019 Haryana Legislative Assembly election, they forged alliance with Shiromani Akali Dal. Previously both parties fought elections together but their alliance fell in 2017 over the issue of the Sutlej Yamuna link canal.