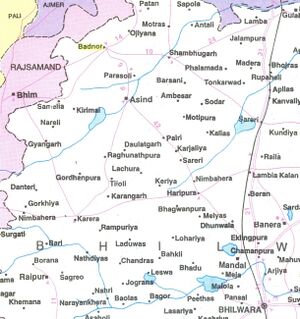 Location of Places around Asind

Iras (इरास) or Hiras (हिरास) is a village in Asind tahsil in Bhilwara district in Rajasthan. PIN -110124

Gothra Bhukaran village near Sikar was the capital of republic of Bhukar Jats. Bhukar is a Sanskrit word comprising of 'Bhu' (land) and 'Kar' (tax), which means land-tax. Bhukars were initially settled at Sambhar in Rajasthan. They were the rulers in this area and their ruling method was that of 'Bhomiacharaa'. Later on they started collecting tax on land. [1]

A group of Chahuman descendants came to Sambhar in 9th century. The newly formed Chauhans forced them to move away from this area. Earlier Bhukars and Chauhans were same prior to their consecration of new Hindu religion at Mount Abu. As per records of Badwa of Bhukars Bhukar people came to Sambhar under the leadership of two brothers Khem Singh and Som Singh. Khem Singh founded the town named 'Hiras' and started increasing his influence in the area. Som Singh went to Jangladesh and founded town named Bhukhredi. After many generations some of these people moved towards Panipat in Haryana. [2]