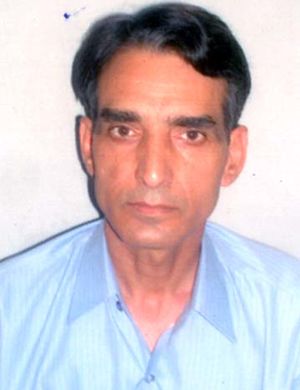 He was born on 01/04/1955 at a small village Bhau ji ki Dhani, district Sikar in Rajasthan. His father (Late) Lakhu Ram Burdak was a farmer. Mother Goran Devi was a housewife.

He did his B.Sc. (Maths.) degree in 1976 from Seth G.B. Poddar College, Nawalgarh, Jhunjhunu (Rajasthan).

His wife, Smt. Chhoti Devi is housewife. He has got two daughters & one son. All are Engineers. Elder daughter Shashi Choudhary is presently an Environmental Engineer, at Jaipur, Rajasthan. She got married to Mr.Manish Jhajharia, a VLSI DESIGN ENGINEER in MNC - Silicon Image, Hyderabad. Younger daughter, Nisha Choudhary, has done B.Tech.(IT) and she is a software Developer in a Software Co. at Bangalore. Her husband Kuldeep Singh Choudhary is a Nework Engineer in IPSoft. His son Rahul Choudhary, B.Tech (E&C) is an Engineer, HCL, Bangalore.

Presently, he is associated with some social Institutions and sincerely involved in other social activities.