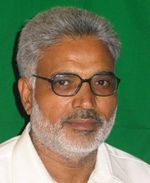 Shri Jai Prakash was born on 2 Dec. 1954 at village Dubbal in Kaithal district of Haryana. Brought up in the lap of rural Haryana, he is one of the promising politician of Haryana.

Shri Jai Prakash started his political career under the shadow of Chaudhary Devi Lal who appointed him president of the Green Brigade and came into lime light when he, along with other activists, descended on Allahabad to lend support in the by-election of VP Singh in 1989.

He was elected MP Lok Sabha in 1990 and remained minister in the Union Govt.