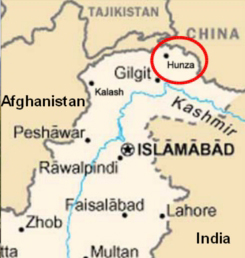 Jamrud (जमरूद) is a town in the Khyber District of Khyber Pakhtunkhwa, Pakistan. The Jamrud Fort is located 17 km west of the city of Peshawar. 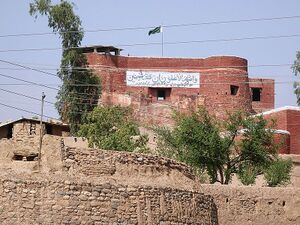 Located in the Valley of Peshawar, on the western fringe of Peshawar city, Jamrud is the doorway to the Khyber Pass which is just to the west of the town. The pass connects Jamrud with Landi Kotal to the west, located near the border of Afghanistan's Nangarhar Province. Jamrud has remained a location on the trade route between Central Asia and South Asia, and a strategic military location. It is located at an altitude of 461 metres (1,512 ft) above sea level. The Jamrud Fort is located 17 km west of the city of Peshawar.

The Battle of Jamrud between the Sikh Empire and Durrani Empire took place at Jamrud where the Sikh general Hari Singh Nalwa was killed on 20 April 1837 and Sikh expansion halted. Harsharan Kaur was a Maan clan Jat woman who defended Jamrud Fort (Pakistan) in 1837 in Battle of Jamrud.[1]

Jamrud was a strategic location and served as a base for a cantonment of the British Indian Army during the period of the British Raj. During the military operations of 1878-79 Jamrud became a place of considerable importance as the frontier outpost on British territory towards Afghanistan, and it was also the base of operations for a portion of the Tirah campaign in 1897-1898. It was also the headquarters of the Khyber Rifles, and the collecting station for the Khyber tolls. The population in 1901 was 1,848. The place continues to be of strategic significance.

Hari Singh Nalwa, Commander-in-chief of Maharaja Ranjit Singh, was dishonourably murdered on 20 April 1837 in an ambush from behind in the Battle of Jamrud between the Sikh Empire and Durrani Empire. It is believed that two Dogras that were in Maharaja Ranjit Singh's cabinet (secretly in the pay of the British and the Afghans) were behind the attack. An undelivered letter to the Maharajah asking for assistance from Nalwa was later found in the possession of one of these Dogras. Bibi Harshan Kaur then made her much heralded walk of valour from Jamrud to Peshawar carrying news that Jamrud was under attack, but it was too late for Nalwa. He died when 60,000 troops attacked his fort. The sikhs told him that they were about to attack as they thought he had died however he was still alive. He then went on to the balcony and rested his Teer (arrow) in to his ear and died whilst the fight was on. Just seeing Hari Singh was enough to scare the forces away who trampled their own people.