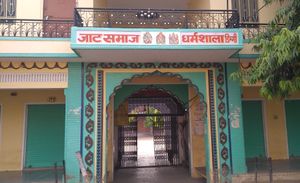 The Jat Samaj Dharmshala is located in Village Diggi in Malpura tahsil of Tonk district in Rajasthan.

The Jat Dharmshala Samiti collected contribution from the community members of Malpura tahsil and constructed 16 rooms, a sabha bhawan, Shiva Mandir etc. They called a grand meeting of the community members and founded the Shiva Temple on 6 February 1993. This meeting was attended by Jagdip Dhankad, Gyan Prakash Pilania, Rupa Ram Murawatia, Prof. Sanwar Lal and others.

The Jat Dharmshala Samiti collected a contribution of about Rs. 1 Crore from Jat community members over a period of 7 years from 1992 to 1998. They constructed a new Dharmshala, a School with 64 rooms, a grand dinning hall, 12 bathrooms, 10 latrines, tube wells etc here at Diggi.

...more details to be added