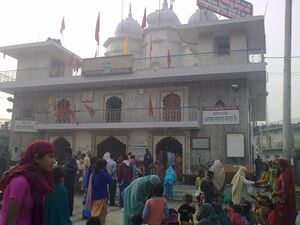 Jharauda Kalan (झाड़ौदा कलां) or Jharoda Kalan (also known as Jharoda झाड़ौदा) village is situated on Delhi-Haryana border, between Najafgarh (Delhi) and Bahadurgarh (Haryana). Much of the agricultural land of the village was occupied by Delhi Government, which has established a large CRPF camp and a Delhi Police Training Centre. The village has a high literacy rate and the economic conditions of general household are much better compared to neighbouring Haryana's villages.

The village is also known for Baba Haridas temple and the adjoining pond. People from far and wide have faith (मान्यता) attached to this temple and an annual fair (after Holi festival) is held there.

It is also said that Jharoda Kalan got its name after a young lady named Jhado of Lowa Kalan.