For another village of same name see - Khandwa Tonk 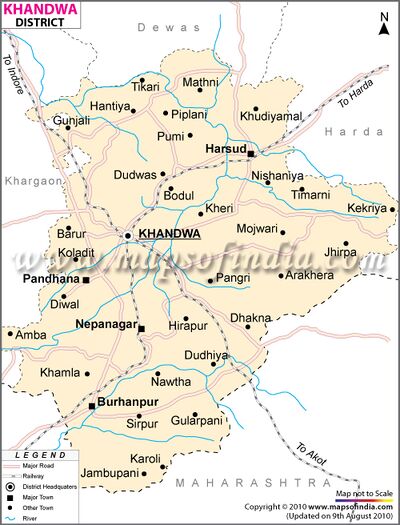 East Nimar or Khandwa (खंडवा) is a tehsil and district in Madhya Pradesh.

Khandwa District lies in the Nimar region, which includes the lower valley of the Narmada River. The Narmada forms part of the northern boundary of the district, and the Satpura Range form the southern boundary of the district. Burhanpur District, to the south, lies in the basin of the Tapti River. The pass through the Satpuras connecting Khandwa and Burhanpur is one of the main routes connecting northern and southern India, and the fortress of Asirgarh, which commands the pass, is known as the "Key to the Deccan". Betul and Harda districts lie to the east, Dewas District to the north, and Khargone District to the west.