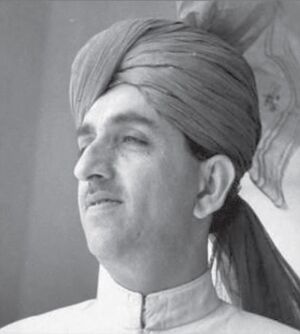 Sir Malik Khizar Hayat Tiwana (सर मलिक खिज़र हयात तिवाना) (1900-1975), Urdu: نواب ملک خضرحیات تیوانہ) was the Punjab Unionist Party Premier of Punjab during the climacteric period 1942-47. He came from a Tiwana Jat family which had been prominent among the landed aristocracy of Punjab since the 15th-16th centuries AD. He was a close associate of Sir Chhotu Ram.

Malik Khizar Hayat's father was Major General Sir Malik Umar Hayat Khan Tiwana(1875–1944), who acted as honorary aide-de-camp to George V and George VI and served as a member of the Council of the Secretary of State for India, 1924-1934.

Tiwana was educated, like his father, at Aitchison College, Lahore. At the age of 16, he volunteered for war service and was commissioned to the 17th Cavalry in 1918. In addition to his brief World War I service, Tiwana also briefly served in the Afghan campaign which followed, earning a mention in dispatches.

Tiwana thereafter assisted his father in the management of the family estates in Punjab, taking responsibility for them while his father was in London, 1929-1934. He was elected to the Punjab Legislative Assembly in 1937 and immediately joined the Cabinet of Sir Sikander Hayat Khan, who had successfully led the Unionist Party (Jamindara League) in the election, as Minister of Public Works. Tiwana remained in this post until 1942, succeeding Sir Sikander as Prime Minister of Punjab from 1942 until 1947. He was a member of the Indian Delegation to the Paris Peace Conference in 1946. Tiwana resigned from his Premiership on 2 March 1947. Although he remained at Simla until independence, he did not thereafter seek an active part in politics and left the country, returning to Pakistan in October 1949, in order to try to put his property affairs there in order.