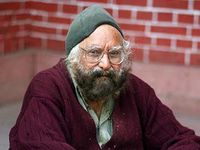 Khushwant Singh was born in Hadali, Khushab District, Punjab Pakistan, in a Sikh family (not the Jat). His father, Sir Sobha Singh, was a prominent builder in Lutyens' Delhi.[1]

He was educated at Modern School, New Delhi, Government College, Lahore, St. Stephen's College in Delhi and King's College London, before reading for the Bar at the Inner Temple.[2]

His birth name, given by his grandmother, was Khushal Singh (meaning "Prosperous Lion"). He was called by a pet name "Shalee".

Khushwant Singh started his professional career as a practising lawyer in 1938. He worked at Lahore Court for eight years.

In 1947 he entered Indian Foreign Service for the newly independent India. He started as Information Officer of the Government of India in Toronto, Canada. He was Press Attaché and Public Officer for the Indian High Commission for four years in London and Ottawa.

In 1951 he joined the All India Radio as a journalist.

Between 1954 and 1956 he worked in Department of Mass Communication of the UNESCO at Paris.

From 1956 he turned to editorial services. He founded and edited Yojana, an Indian government journal in 1951 -1953; The Illustrated Weekly of India, a newsweekly; and two major Indian newspapers, The National Herald and the Hindustan Times.

From 1980 to 1986, Singh was a member of Rajya Sabha, the upper house of the Indian parliament. He was awarded the Padma Bhushan in 1974 for service to his country. In 1984, he returned the award in protest against the siege of the Golden Temple by the Indian Army.

In 2007, the Indian government awarded Khushwant Singh the Padma Vibhushan.

Singh was a votary of greater diplomatic relations with Israel at a time when India did not want to displease Arab nations where thousands of Indians found employment. He visited Israel in the 1970s and was impressed by its progress.

Khushwant Singh[11] wrote about Origin of the Jats:

Khushwant Singh[12] said it was the Jats who introduced the panchayat system (a body of five elected people that is widely practiced in modern India):

"They (Jats) brought with them certain institutions, the most important being the pancayat (panchayat), an elected body of five elders, to which they pledged their allegiance. Every Jat village was a small republic".

Some facts about the Jat are, however, indisputable. These are neatly summed up by S. Khushwant Singh, a journalist of repute. "Every Jat Village was a small republic made of people of kindred blood who were as conscious of absolute equality between themselves as they were or their superiority over men of other castes who earned their livelihood as weavers, potters, cobblers and scavengers. The relationship of a Jat village with the State was that of a semi-autonomous Unit paying a fixed sum of money. Few governments tried to assert authority, and those Which did, soon discovered that sending out armed militia against fortified Villages was not very profitable. The Jats' spirit of freedom and equality refused to submit to Brahmanical Hinduism and in its turn drew the censure of the privileged Brahman of the Gangetic plains ... The upper caste Hindus' denigration of the Jat did not in the least lower the Jat in his own eyes". The Jat strongly asserts that "Gold does not change its colour for fear of flames", and "embers are, after all embers even though covered with ash".

S. Khushwant Singh further adds "He (the Jat) assumed some-what 'condescending attitude towards the Brahman, whom he considers little better than a soothsayer or a beggar, or the Kshatriya, who disdained earning an honest living and was proud of being a mercenary. The Jat was born a worker and a warrior. He tilled his land with his sword girded round his waist. He fought more battles for the defence of his motherland than the Kshatriya, for unlike Kshatriya the Jat seldom fled from his village when the invaders came. And if the Jat was maltreated or if his Wife was molested by the conqueror on his way to Hindustan, he settled his score by looting the invader's caravans ... His brand of patriotism was at once hostile to foreigners and benign, even Contemptuous towards his own countrymen whose fate depended so much on his courage and fortitude", (History Of the Sikhs, Vol. 1, pp. l5f). In fact, the Jats have always "sacrificed their day for our to-day and their to-day for our tomorrow."

Singh died of natural causes on 20 March 2014 at his Delhi-based residence, at the age of 99. His death was mourned by many including the President, Vice-President and Prime Minister of India. He is survived by his son and daughter.

The short bio data is available at the following link of Rajya Sabha website: http://rajyasabha.nic.in/rsnew/pre_member/1952_2003/s.pdf

Back to Jat Historian/Indian Foreign Service