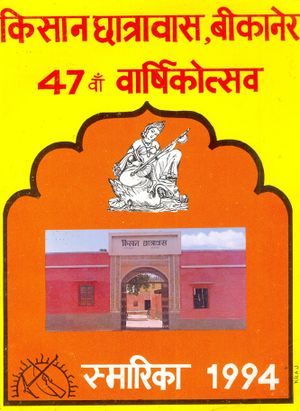 On 10 March 1947 a trust of Kisan Dharmshala and Kisan Chhatrawas was registered with Registrar of Bikaner state with following members:

Due to lack of space in Rani Bazar Hostel the then collector Govardhan Singh Chaudhary (Benda) helped to purchase land on Sagar Road. The hostel on Sagar Road was constructed by Ch. Malu Ram Kaswan of Gusainsar Bara with the help of contribution from donors. A plot adjoining the hostel was purchased on 7.10.88 at a cost of 1.40 lakh. Financial help for this was provided by Dr. Ram Karan Chaudhari (Molania), Tulsi Ram Moond Ex. Pradhan of (Moondsar), Ram Ratan Kaswan ex. Sarpanch of Ramsar, Ratan Lal Sihag of Swarupdesar.

Back to Jat Organizations/Jat Monuments