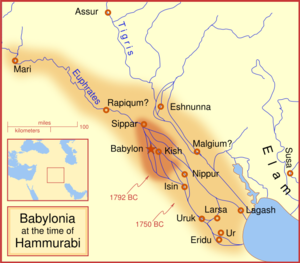 Kish(Sumerian: Kiš; transliteration: Kiŝki; cuneiform: 𒆧𒆠; Akkadian: kiššatu) is modern Tell al-Uhaymir (Babil Governorate, Iraq), and was an ancient city of Sumer. Kish is located some 12 km east of Babylon, and 80 km south of Baghdad (Iraq). Formerly known as Kesh or Kish which Arrian[1] has mentioned as Nautaca captured by Alexander the Great in 327 BC.

Kish was occupied beginning in the Jemdet Nasr period (ca. 3100 BC), gaining prominence as one of the pre-eminent powers in the region during the early dynastic period.

The Sumerian king list states that it was the first city to have kings following the deluge,[2] beginning with Jushur. Jushur's successor is called Kullassina-bel, but this is actually a sentence in Akkadian meaning "All of them were lord". Thus, some scholars have suggested that this may have been intended to signify the absence of a central authority in Kish for a time. The names of the next nine kings of Kish preceding Etana are all Akkadian words for animals, e.g. Zuqaqip "scorpion". The Semitic nature of these and other early names associated with Kish reveals that its population had a strong Semitic component from the dawn of recorded history.[3]

The 12th king of Kish appearing on the list, Etana, is noted as "the shepherd, who ascended to heaven and consolidated all the foreign countries". Although his reign has yet to be archaeologically attested, his name is found in later legendary tablets, and Etana is sometimes regarded as the first king and founder of Kish himself. The 21st king of Kish on the list, Enmebaragesi, said to have captured the weapons of Elam, is the first name confirmed by archaeological finds from his reign. He is also known through other literary references, where he and his son Aga of Kish are portrayed as contemporary rivals of Dumuzid, the Fisherman and Gilgamesh, early rulers of Uruk.

Some early kings of Kish are known through archaeology, but are not named on the King list. These include Utug or Uhub, said to have defeated Hamazi in the earliest days, and Mesilim, who built temples in Adab and Lagash, where he seems to have exercised some control.

The Third Dynasty of Kish is unique in that it begins with a woman, previously a tavern keeper, Kubau, as "king". She was later deified as the goddess Kheba.

Afterwards, though its military and economic power was diminished, it retained a strong political and symbolic significance. Just as with Nippur to the south, control of Kish was a prime element in legitimizing dominance over the north. Because of the city's symbolic value, strong rulers later added the traditional title "King of Kish", even if they were from Akkad, Ur, or Babylon. One of the earliest to adopt this title upon subjecting Kish to his empire was King Mesannepada of Ur. A few governors of Kish for other powers in later times are also known.

Sargon of Akkad came from the area of Kish. The city's patron deity was Zababa (or Zamama) in Akkadian times, along with his wife, the goddess Inanna.

Kish continued to be occupied through the old Babylonian, Kassite, and Neo-Assyrian periods, and into classical times, before being abandoned. Bhim Singh Dahiya[4] writes....A History of Persia throws light on the kingdoms of the Jats in the Central Asia in the fourteenth century A.D.

"The Governor of Mongolia or Jatah at this period was Tughluk Khan, who on seeing the state of anarchy into which Transoxiana had fallen, determined to annex it. He started on an expedition for this purpose in A.H. 761, (1360 A.D.) and marched on Kesh; Haji Barlas, deeming the odds too great offered no defence and fled to Khurasan (Persia) where he was after wards killed by brigands ... to save the situation, Tamerlane, decided to tender his submission to Tughluk Khan ... in the following years, the Khan of Jateh obtained possession of Samarkand and appointed his son Khoja alias Oghlan to the Governorship of Transoxiana with Tamerlane as his Counselor."

As mentioned above this dynasty was of the Oghlan clan of the Jats who were Buddhists at that time. It should be mentioned that Khan is not a Muslim title, it is a pre-Muslim Central Asian title adopted by many Buddhist kings. It is derived from Khakan/ Kagan/Khan. This title was being used in India, as late as the fourteenth century A.D. Kalhana's Rajatarangini mentions a king, Alakhan of Gujrat (Punjab), and Jonaraja's Chronicles show that at the time of its capture by Sultan Shihabuddin of Kashmir (1354-1373), the ruler of Udabhaṇḍa (modern Und, near Attock), was one Govinda Khan.196 It is also well known to historians that in 1289 A.D. Jat king Arghun, son of Abaga had proposed to the Christians of Khurasan area, a joint attack on the Muslims who were a new rising power in the Oxus region. It was his successor Ghajan Khan who upon his accession to the throne in 1295 A.D., proclaimed himself a Muslim. He was the first Jat king who embraced Islam, and this marked the beginning of the process of conversion of Central Asia to that faith.

Hukum Singh Panwar (Pauria)[5] states: "Mohanjodaro sold its seals at Ur and Kish. The humped bull of tile Guts of the Indus valley was developed as winged sentinel of Assyrian palaces at Nineveh. It is represented as human-headed & bearded emblem of bull-god of prosperity on the columns of Apadan. The Indus bull created the Apis bull of the Egyptians. The Indus metric system standardised the weights and measures of Mesopotamia and further west. The cheque and banking system of the Panis (Phoenicians) of the Sapta Sindhu and their coins struck and minted at Carthage, Sodom and Tyre, after migrations there, became models for the currency and banking in the west. All these are the solid proofs, now universally accepted, of the migrations to and occupations of those countries by Indians in the hoary past (B.S.Upadhayaya, 1973: 2).