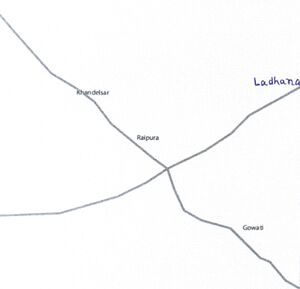 Chaudhari Balan Singh Burdak came from Sambhar and founded village Balrasar in samvat 821 (765 AD) on magh sudi basant panchami. He constructed a pakka well 85 hath deep and 4-3/4 hath wide. he also dug a pond named it Balanu after him in north of the village. Left 525 bigha land under it. He constructed a Shiva temple here named Seo Badrinarayan.

Chaudhari Mal Singh moved from village Balrasar to Kari and founded it on chaitra sudi ram navami samvat 825 (768 AD). He constructed a pakka well 90 hath deep and 4-3/4 hath wide facing north. He also constructed Gopinath temple and granted 51 bigha land for the temple. A land of 225 bigha was left in west of Karanga Bara village during the rule of Virabhan Chauhan of Hansi in Samvat 835 (778 AD).

Chaudhary Malu Ram, Dharani Jakhar, Kunwar Alan Singh and Veer Bhan came from Kari village and founded Sarnau-Kot and constructed Sarnau fort with gate in eastern side. They constructed Janana and Mardana Mahals, Bara Dari and boundary wall around Sarnau village and Sarnau fort. A separate front gate was constructed for safety. A ditch was dug around the fort and it was further protected by a sand-barrier-wall dhulakot).

In samvat 1032 (976 AD) the Delhi ruler Raja Mahi Pal Tanwar gave Jagir of 84 villages to Burdaks with capital at Sarnau. Halani Baori was constructed at Sarnau after Chaudhary Halu Ram. A baori was constructed after Jeenmata with 104 steps. A garden was developed. The constructed plinth of the fort was 1515 yards. Three temples were constructed at Sarnau namely, Shivabadri Kedarnath temple, Ashapuri Mata temple and Hanuman temple. Pooja was performed by Rughraj Brahman. 152 bigha of land was gifted for maintenance of the temples on paush badi 7 samvat 1033 (977 AD).

On falgun badi fularia dooj samvat 1035 (979 AD) two pakka wells were constructed, one at Sarnau Fort and other at Sarnau village. 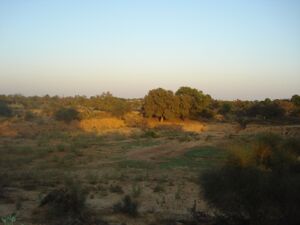 There was tension between Dhakas and Burdaks. There seem apparently two reasons regarding this tension.

As per records of Bards there were 6 wars between Burdaks and Dhakas as under:

Fifth war – Mom Raj Dhaka attacked Sarnau Fort fifth time on Jeshtha Badi 2 samvat 1313 (1256 AD) with an army of 25000 soldiers. War continued for Seven days (Jeshtha Badi 2-9). Mom Raj Dhaka was defeated with a loss of 5000 people and injury to 2000 people. The Dhaka Army was badly defeated as they did not get drinking water. The chief of Burdak army was Kunwar Padam Singh Burdak.

Who was Mom Raj

Who was Mom Raj ? H.A. Rose[1] writes that The Ahulana tradition traces their origin to Rajasthan. Their ancestor was coming Delhi-wards with his brothers, Mom and Som, in search of a livelihood. They quarrelled on the road and had a deadly fight on the banks of the Ghātā, naddi. Mom and Som, who were on one side, killed their kinsman and came over to Delhi to the king there who received them with favour and gave them lands : to Som the tract across the Ganges where his descendants now live as Rajputs. Mom was sent to Rohtak, and he is now represented by the Jats there as well as in Hansi and Jind. The Rohtak party had their head-quarters at Ahulana in that district, and thence on account of internal quarrels they spread themselves in different directions, some coming into the Delhi district.

Revival of Burdaks from Nanak 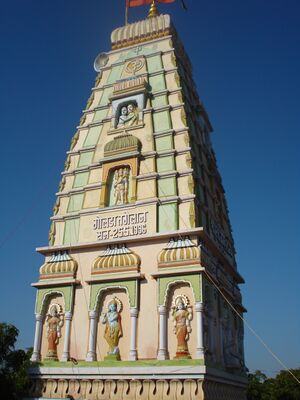 It so happened that Rambha of gotra Kharra, the wife of Kunwar Padam Singh Burdak, was not in the Sarnau fort at that time. She was away with his in-laws at village ‘Kharra-Ka-Gothra’ and hence was saved. She had a pregnancy of three months at that time. She gave birth to a child in nanihal village ‘Kharra-Ka-Gothra’ at ‘Dungar ki Ghati’ on chaitra Sudi Navami Samvat 1316 as per blessings of Gusainji. He was named Nanak. He was married to Kushalji Tetarwal’s daughter Mankauri.

Burdaks in Rajasthan are descendant of this sole child. The sole survivor woman Rambha was a devotee of god Gusainji. Burdaks consider Gusainji as their kuladevata and pay homage to the deity at place called Junjala near Nagaur city. 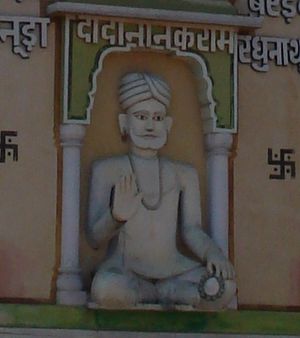 Nankji constructed a Pakka well here in samvat 1353 (1296 AD). He took the help of Khandela Raja Bhoj Raj. This was in the reign of Alaudin Khilji (1296-1316) at Delhi. The pooja was performed by Pandit Har Narayan. In samvat 1353 Nanakji founded a Kachcha temple of Gusainji and gifted a land measuring 52 bighas for the maintenance of temple. In samvat 1353 Nanakji, Kunwar Sahraj, Dhanraj and Karma Ram left a gauchar land measuring 1111 bigha in the name of Rambha Kharra's father Indraji and constructed Indolav talab in the name of grandfather Indra Ram. 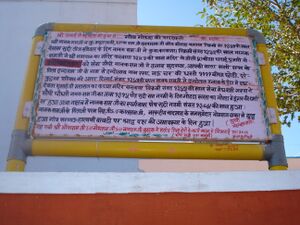 The village Gothra founded by Nanakji became Gothra Tagalan during the period of Aurangzeb. Aurangzeb had sent army to destroy temples of Harsh and Jeenmata. After destroying the temples of Harsh when the army reached Jeenmata temple it was attacked by honey-bees. Jeenmata is also called Bhramaramata after honey-bees. The honey-bees caused a great loss to Aurangzeb’s army. Local tradition says it was due to the annoyance of Jeenmata. Aurangzeb was told to pay respect to Jeenmata to get rid of honey-bees. When he did so the honey-bees fled away. Aurangzeb promised to send savaman tel and bakala as offerings for harsh temple every year and gifted Jagir of village Gothra to Harphool Tigala Jat who was the priest of Jeenmata at that time. It was after Tigala Jats the village came to be known as Gothra Tagalan.

At present a grand and beautiful temple of Gusainji has been erected by the devotees on the site of old temple of Gusainji. On the temple complex there is also a notice board revealing its history and the history of village. The priest of the temple at present is Mohandas Maharaj (9772344906). 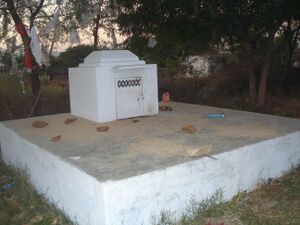 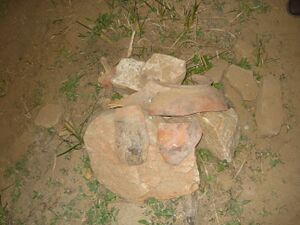 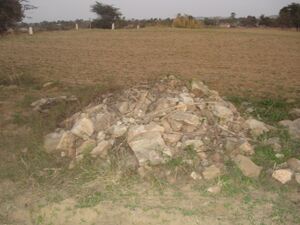 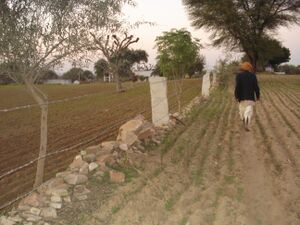 It was a curiosity to see the present condition of Sarnau, the old capital of Burdak clan. The initial information about Sarnau had been gathered by Bhanwar Lal Bijarnia of Sikar. Author requested him to accompany on tour to old places connected with the Burdak history. On 12 December 2010 we visited the places Harsh Parvat, Jeenmata Dham, Jeenwas, Gothra Tagalan, the abandoned Sarnau Kot and Sarnau village.

When we go on road from village Ranoli, situated south of Sikar town on NH-11, to Kochhor we find a village Khandelsar near Kochhor. In the rohi (Agricultural land) of Khandelsar village there is a site with some ancient ruins of habitation. This site is about 7 kms from Jeenmata in the east and is closer to village Raipura. We have to take a kachcha road from Raipura in east to south direction to approach Sarnau. The village Raipura is situated between Khandelsar and Gowati. Local people pronounce Sarnau as Sandau. Here are the sites connected with Sarnau:

Sandau Ki Johdi - The local people remember the history of war of Burdaks and Dhakas and call this site as ‘Sandau Ki Johdi’ or ‘Sandau Ki Rohi’. From Raipur village at a distance of 1 km we first reach ‘Sandau Ki Johdi’. As per records of the bards there were three temples of Shiva, Hanuman and Ashapuri Mata respectively. We could see the Shiva temple which is being expanded at present. Second temple was probably Ashapuri Mata which bears some Inscription at the top. There was third temple of Hanuman which we could not see due to lack of time.

Sandau Fort – In the east of ‘Sandau Ki Johdi’ is situated ‘Sandau Fort’. It has old ruins. When we climb from west direction we can see the traces of deep ditch and the sand wall protection system. One old well and Baori can be easily identified. The hills surround the place from three directions except east. It was in east where a wall and double gates were constructed as per records of bards. There are old Bargad trees on the site. Bargad is recorded in the records of bards as one of the five symbols of Chauhan rulers. There are more ancient trees which indicate development of garden. There is one hillock in the middle of the Fort site from where one can see view in the east direction. From this hillock we can see in east open side on left a village called ‘Garhwalon Ki Dhani’ and on right village ‘Bajiyon Ki Dhani’. We can also see from here the site of Ladhana Fort of Bijarnias who ruled in east of Sarnau at that time.

Sandau village – The abandoned Sandau village has no direct approach. This is a very productive land. We took the help of old person Shri Ugam Singh Shekhawat of Raipura village who led us to the site passing through cultivated fields. Shri Ugam Singh Shekhawat’s farm is in east of the site of Sandau. While moving on foot through field he narrated the story of war of Burdaks and Dhakas. We reached the place Sandau at last at bout the time of Sunset.

On the site of Sandau village there is a small temple of Bhaumiaji. It is called ‘Bhaumiaji ka Deora’. Local people worship him as deity. He is considered by the local people as the protector deity.

The traces of ancient habitation can be seen all around. In the process of cultivation villagers find stones, boulders, pot sherds etc. People in the past have dug some places in search of gold and silver also.

There is a need to protect and develop the place being of historical importance. Genealogy of Burdaks