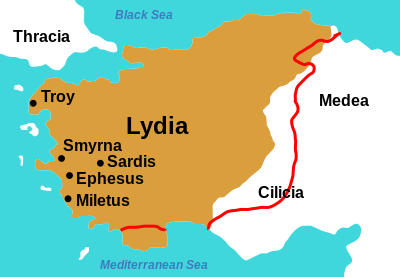 Map of Smyrna and other cities within the Lydian Empire. 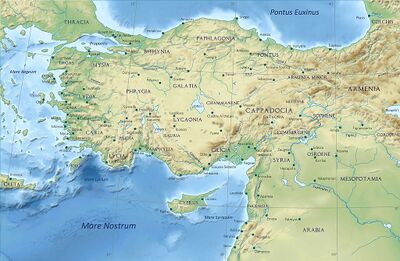 Lydia on Map of Anatolia

Lydia was an Iron Age kingdom of western Asia Minor.

It was located generally east of ancient Ionia in the modern western Turkish provinces of Uşak, Manisa and inland İzmir. Its population spoke an Anatolian language known as Lydian.

At its greatest extent, the Kingdom of Lydia covered all of western Anatolia. Lydia (known as Sparda by the Achaemenids) was a satrapy (province) of the Achaemenid Persian Empire, with Sardis as its capital. Tabalus, appointed by Cyrus the Great, was the first satrap (governor).

Lydia was later the name of a Roman province. Coins are said to have been invented in Lydia around the 7th century BC.

Bhim Singh Dahiya[1] writes that ....Assurbanipal died in 626 B.C. and his successors were disputing the throne. Such an opportunity was not to be lost and the second attack of Nineveh began. The Assyrian emperor burnt himself in his palace and perished with his family. In the words of prophet Nahum, "the gates of the river shall be open and the palace shall be dissolved."4 Thus in 606 B.C. Nineveh fell and so utter was its ruin that the Assyrian name was forgotten and the history of their empire soon melted into fable. Babylonia itself was roped with ties of marriage and a daughter of Huva Kshatra became the Queen of Nebu-Chad-Nezzar. Armenia and Cappadocia were included in the Manda empire. Lydia was emerging as a powerful nation in the west and it was inevitable that the two powers should collide. The war began but in 585 B.C. when there was a total eclipse of the sun, it was stopped after six years of fighting, under a peace treaty. A daughter of the Lydian emperor was married to the heir apparent of Manda, and the kingdom Urartu was annexed to Manda empire. Next year, I.e. 584 B.C. this great emperor died. Thus from a beaten nation he raised the Mandas into the most powerful an virile empire of that time. It is aptly stated that the east was Semitic

[p.131]: when he began to rule but it was Aryan when he stoped. This leader in one of the great moments in history was succeeded by Ishtuvegu, Astyages of the Greeks. He was an unworthy son of his worthy father and he deviated from the basic policy of the Mandas, i.e., to keep fit and ready for war. Luxuries of all sorts became the habit of the court. Elaborate ceremonies were prescribed for the court and the courtiers were directed to wear red and purple flying robes. Golden chains and collars were affixed and drinking vessels were made of gold. Under such influence the emperor became lethargic. He was also superstitious. He had no son and his daughter named Mandani (after the clan name) was married to a small vassal prince of Ellam, because It was forecast by the Magis that her issue will become the king of Asia and Europe. The emperor saw a vine outgrowing from Mandani which overshadowed the whole of Asia. He, therefore, feared to marry her to a noble man of his own country and thus he wanted to flout the fate. But as always happens, it was impossible to do so. The first issue of princess Mandani, was Cyrus who became the emperor, after putting in prison his maternal grandfather, Ishtuvegu through the help of General Harpagus whose son the crooked king had made into a dinner served to Harpagus himself. Three battles were fought, as per traditions preserved by the classical writers, before Ecbatana itself fell in 550 B.C. Cyrus was emperor of Persia and had inherited the empire of the Mandas which was further extended by him. But this does not mean that efforts were not made to recover the lost empire. We hear that Cyrus himself fought wars against the Jats in Balakh and the Caspian sea. At both the places he was unsuccessful. Balakh remained under the Kangs, and the small kingdom of the Massaagate ruled over by the Dahias, remained free and independent.