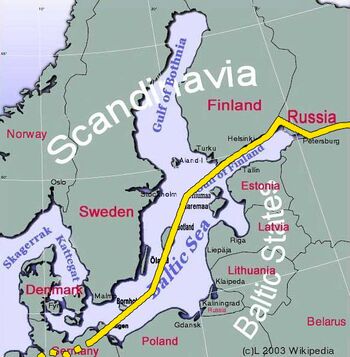 Lithuania, officially the Republic of Lithuania (Lithuanian: Lietuvos Respublika) is a country in Northern Europe, the southernmost of the three Baltic states. Situated along the southeastern shore of the Baltic Sea, it shares borders with Latvia to the north, Belarus to the southeast, Poland, and the Russian exclave of Kaliningrad to the southwest.

The first people arrived on the territory of modern Lithuania in the 10th millennium BC after the glaciers had retreated and the last glacial period had ended. According to historian Marija Gimbutas, the people came from two directions: from the Jutland Peninsula and from present-day Poland. They brought two different cultures as evidenced by the tools they used. They were traveling hunters and did not form more stable settlements. In the 8th millennium BC, the climate became much warmer and forests developed. The people started to gather berries and mushrooms from the forests and fish in the local rivers and lakes. They traveled less. During the 6th–5th millennium BC, people domesticated various animals, the houses became more sophisticated and could shelter larger families. Agriculture did not arrive until the 3rd millennium BC because there were no efficient tools to cultivate the land. Crafts and trade also started to form at this time. Proto-Indo-Europeans came around 2500 BC, and the identity of the Balts formed about 2000 BC.

The first Lithuanians were a branch of an ancient group known as the Balts, whose tribes also included the original Prussian and Latvian people. The Baltic tribes were not directly influenced by the Roman Empire, but the tribes did maintain close trade contacts (see Amber Road).

Lithuanians have built a nation that has endured for most of the past ten centuries, while Latvians acquired statehood in the 20th century and Prussian tribes disappeared in the 18th century. The first known reference to Lithuania as a nation (Litua) comes from the annals of the monastery of Quedlinburg and is dated February 14, 1009.

Of the living languages, Lithuanian language is the closest to the Sanskrit, the sacred ancient language of India, which in its turn is close to the proto-Indo-European language. It is written in an adapted version of the Roman script.The old Lithuanian name for the Belorussians (Belarusans), their Eastern Slavic neighbors, is "gudai" which is nothing else but Goths (Greek Ptolemy called the Goths gutai, Romans called them gutones). Which means that roughly 1500 years ago Goths used to be the Eastern neighbors of Lithuanians. The Lithuanian name for the German man is vokietis (Germany - Vokietija), which some originate from the Gothic tribe vagoths, originally living in Gotland Island in the Baltic Sea. Few other Germanic tribes are thought to originate from Gotland. [1]

Hewitt[4] notes the connection between Jats and Goths: "The Jats ... trace their descent to the land of Ghazni and Kandahar, watered by the mother-river of the Kushika race, the sacred Haetuman or Helmand. Their name connects them with the Getae of Thrace, and thence with the Gattons, said by Pytheas to live on the southern shores of the Baltic, the Gaettones placed by Ptolemy and Tacitus on the Vistula in the country of the Lithuanians, and the Goths of Gothland = Sweden. This Scandinavian descent is confirmed by their system of land-tenure, for the chief tenure of the Muttra district is that called Bhagadura, in which the members of the village brotherhood each hold as their family property a separate and defined area among the village lands, according to the customs of the Bratovos of the Balkan peninsula and the Hof-bauers of North-West [5] Germany .. The Getae of the Balkans are said by Herod to be the bravest and most just of the Thracians."