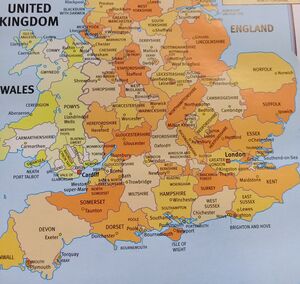 London (लंदन) is the capital and most populous city of England and the United Kingdom.It was founded by the Romans, who named it Londinium.

Standing on the River Thames in the south east of the island of Great Britain, London has been a major settlement for two millennia.

It is an ancient name, attested already in the first century AD, usually in the Latinised form Londinium;[1] for example, handwritten Roman tablets recovered in the city originating from AD 65/70-80 include the word Londinio ("in London").[2]

Over the years, the name has attracted many mythicising explanations. The earliest attested appears in Geoffrey of Monmouth's Historia Regum Britanniae, written around 1136.[3] This had it that the name originated from a supposed King Lud, who had allegedly taken over the city and named it Kaerlud.[4]

Modern scientific analyses of the name must account for the origins of the different forms found in early sources Latin (usually Londinium), Old English (usually Lunden), and Welsh (usually Llundein), with reference to the known developments over time of sounds in those different languages. It is agreed that the name came into these languages from Common Brythonic; recent work tends to reconstruct the lost Celtic form of the name as *Londonjon or something similar. This was adapted into Latin as Londinium and borrowed into West Germanic, the ancestor-language of English, before English had become widely spoken in what later became England.[5]

The etymology and original meaning of the Common Brythonic form is much debated. A prominent explanation was Richard Coates's 1998 argument that the name derived from pre-Celtic Old European *(p)lowonida, meaning "river too wide to ford". Coates suggested that this was a name given to the part of the River Thames which flows through London; from this, the settlement gained the Celtic form of its name, *Lowonidonjon.[6] However, most work has accepted a Celtic origin for the name, and recent studies have favoured an explanation along the lines of a Celtic derivative of an proto-Indo-European root *lendh- ('sink, cause to sink'), combined with the Celtic suffix *-injo- or *-onjo- (used to form place-names). Peter Schrijver has specifically suggested, on these grounds, that the name originally meant 'place that floods (periodically, tidally)'.[7][8]

*Natural History Museum in London exhibits a vast range of specimens from various segments of natural history. It is one of three major museums on Exhibition Road in South Kensington, the others being the Science Museum and the Victoria and Albert Museum. The Natural History Museum's main frontage, however, is on Cromwell Road.

The London Underground is the oldest underground railway network in the world.

London's ancient core, the City of London, largely retains its 1.12-square-mile (2.9 km2) medieval boundaries. Since at least the 19th century, "London" has also referred to the metropolis around this core, historically split between Middlesex, Essex, Surrey, Kent and Hertfordshire,[11]which today largely makes up Greater London,[12] a region governed by the Mayor of London and the London Assembly.

Two recent discoveries indicate probable very early settlements near the Thames in the London area. In 1993, the remains of a Bronze Age bridge were found on the south foreshore, upstream of Vauxhall Bridge.[13] This bridge either crossed the Thames or reached a now lost island in it. Two of those timbers were radiocarbon dated to between 1750 BC and 1285 BC.[14]

In 2010 the foundations of a large timber structure, dated to between 4800 BC and 4500 BC,[15] were found on the Thames's south foreshore, downstream of Vauxhall Bridge.[16] The function of the mesolithic structure is not known. Both structures are on the south bank, at a natural crossing point where the River Effra flows into the Thames.[17]

Although there is evidence of scattered Brythonic settlements in the area, the first major settlement was founded by the Romans about four years[18] after the invasion of AD 43.[19] This lasted only until around AD 61, when the Iceni tribe led by Queen Boudica stormed it, burning it to the ground.[20] The next, heavily planned, incarnation of Londinium prospered, and it superseded Colchester as the capital of the Roman province of Britannia in 100. At its height in the 2nd century, Roman London had a population of around 60,000.[21]

With the collapse of Roman rule in the early 5th century, London ceased to be a capital, and the walled city of Londinium was effectively abandoned, although Roman civilisation continued in the area of St Martin-in-the-Fields until around 450.[22] From around 500, an Anglo-Saxon settlement known as Lundenwic developed slightly west of the old Roman city.[23] By about 680, the city had regrown into a major port, although there is little evidence of large-scale production. From the 820s repeated Viking assaults brought decline. Three are recorded; those in 851 and 886 succeeded, while the last, in 994, was rebuffed.[24]

The Vikings established Danelaw over much of eastern and northern England; its boundary stretched roughly from London to Chester. It was an area of political and geographical control imposed by the Viking incursions which was formally agreed by the Danish warlord, Guthrum and the West Saxon king Alfred the Great in 886. The Anglo-Saxon Chronicle recorded that Alfred "refounded" London in 886. Archaeological research shows that this involved abandonment of Lundenwic and a revival of life and trade within the old Roman walls. London then grew slowly until about 950, after which activity increased dramatically.[25]

By the 11th century, London was beyond all comparison the largest town in England. Westminster Abbey, rebuilt in the Romanesque style by King Edward the Confessor, was one of the grandest churches in Europe. Winchester had previously been the capital of Anglo-Saxon England, but from this time on, London became the main forum for foreign traders and the base for defence in time of war. In the view of Frank Stenton: "It had the resources, and it was rapidly developing the dignity and the political self-consciousness appropriate to a national capital."[26]

Westminster Abbey, as seen in this painting (by Canaletto, 1749), is a World Heritage Site and one of London's oldest and most important buildings

After winning the Battle of Hastings, William, Duke of Normandy was crowned King of England in the newly completed Westminster Abbey on Christmas Day 1066.[27] William constructed the Tower of London, the first of the many Norman castles in England to be rebuilt in stone, in the southeastern corner of the city, to intimidate the native inhabitants.[28] In 1097, William II began the building of Westminster Hall, close by the abbey of the same name. The hall became the basis of a new Palace of Westminster.

In the 12th century, the institutions of central government, which had hitherto accompanied the royal English court as it moved around the country, grew in size and sophistication and became increasingly fixed in one place. For most purposes this was Westminster, although the royal treasury, having been moved from Winchester, came to rest in the Tower. While the City of Westminster developed into a true capital in governmental terms, its distinct neighbour, the City of London, remained England's largest city and principal commercial centre, and it flourished under its own unique administration, the Corporation of London. In 1100, its population was around 18,000; by 1300 it had grown to nearly 100,000. Disaster struck in the form of the Black Death in the mid-14th century, when London lost nearly a third of its population. London was the focus of the Peasants' Revolt in 1381.[29]

London was also a centre of England's Jewish population before their expulsion by Edward I in 1290. Violence against Jews took place in 1190, after it was rumoured that the new King had ordered their massacre after they had presented themselves at his coronation.[30] In 1264 during the Second Barons' War, Simon de Montfort's rebels killed 500 Jews while attempting to seize records of debts.[31]