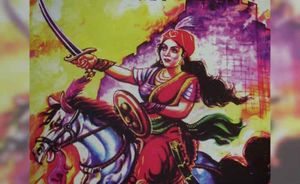 Longshree (लोंगश्री) was a brave Jat warrior woman, daughter of Surjeet Singh Solanki of Midhakur, a village of Solanki Khap in tahsil and district Agra of Uttar Pradesh. She was married to Indra Sen Bisayati, son of Chief of Chiksana Chaudhary Chandra Sen Bisayati.

Longshree Devi was well trained in the art of warfare. She was smart, caring and very loyal to her in laws. She is known for her bravery in Battle of Chiksana where she killed Jahan Khan the commander of Mughal army in May 1694. A bloody encounter occurred at Chiksana in which the Jat women under leadership of Longshree displayed their reckless courage in the battle field.[1][2]

Married to Indra Sen Bisayati, son of Chief of Chainkora

The Chief of Chiksana was Chaudhary Chandra Sen Bisayati. He was an Important Sardar of 'Sardar Rai' Ram Janki Chahar (Ramki Chahar) who was the first ruler of Sidgiri. The daughter of Ch.Chandra Sen Bisayati was married to Thakur Braj Raj of Sinsini hence Chandra Sen was Nana of Rao Churaman Singh and Bhao Singh (Father of Maharaja Badan Singh of Deeg). He remained an important Sardar of 'Sardar Rai' Maujh Singh Chahar (the successor of Ramki Chahar). Ch.Chandra Sen had 8 sons (Indra Sen,Bhim Sen,Jal Sen,Kamal Pal,Ram Dev, Kishan Das,Harbir Singh and Paramjit Singh). His son Indra Sen Bisayati was married to Longshree Devi a Solanki Jat women (daughter of Surjeet Singh Solanki of Midhakur). Longshree Devi was well trained in the art of warfare,She was smart, caring and very loyal to her in laws.

Battle of Chiksana was valour of Longshree Devi and other Jat women on 8 May 1694 between Jats under Longshree Devi Solanki and the Mughal Empire under Jahan Khan.

In the Jat-Mughal War (1688-97) 6 newly carved out Jat principalities/Dung (from Mughal Empire) and Balram Singh Dagur (the ruler of Jagrauti) fought as a confederacy against Mughals.

The ruler's of Principality of Sonkh, Sogar and Sinsini (Banarasi Singh Kuntal, Rai Rustam Singh, Rao Churaman respectively) were ousted from their strongholds by 1693. They with their prominent Sardars took refuse with 'Sardar Rai' Maujh Singh of Chaikora (The ruler of Principality of Sidgiri) and continued their fight against Mughal Empire.

By May,1694 Mughals have surrounded the Fort of Chiksana from all sides. Jat were less in number and all the ring leaders took refuge in the Fort.It was very important for the Ring leaders to safely escape from Chainkora to continue there fight against Mughal and won the War.

Mughal surrounded the Castle of Chainkora with a force 10 time greater in number then the Jat warriors. Ch.Chandra Sen gave the 4 Jat rulers and their Sardars assurance that 'Whatever happens today the Bisayati soldiers won't allow the Mughals to capture the Jat Chiefs. The Mughal under the command of Jahan Khan besieged the Fortress of Chainkora. 7 out of 8 sons (Indra Sen was busy making arrangements for the escape of the Jat Cheifs) of Ch.Chandra Sen came out of the castle with their soldiers to face Jahan Khan. They fought bravely but all perished.

Indra Sen Bisayati after hearing the news of the death of all his brothers angrily sat on his horse, and came out of the Fortress alone. The brave warrior couldn't stand alone against the Mughal forces and soon he was also martyred. The Jat women broke their bangles and prepared to die as now it was obvious for the Fortress to soon fall. The Jat rulers and their Sardar now abandoned the idea of escaping and prepared to fight the Mughal forces outside the Fortress. Chaudhary Chandra Sen stopped the Jat Chiefs and said, 'So what all my sons have perished, so what almost all my men have died as long as I am alive I will fulfill my promise'.

Longshree Devi realized it is not the right time for mourning the death of her husband. She went to her Devranis and Jetanis (sister in laws). All of them were crying over there husbands death and preparing to die. Longshree Devi mocked them 'How can you shameless women cry. Our Chaudhary had made a promise to the Ganpatis (Ruler of Gan Rajyas) and all his sons have fought bravely and died for it. Now our Father-in-law is going alone to fulfill his promise,but how long could the brave old man stand against the endless Mughal hordes. What will the future generation of Bisayatia Pal say that when it was time for our Chaudhary to fulfill his promise his daughter in laws were crying in their chamber like little girls instead of fighting the Mughals!'

The Bahuranis and other widows charged by Longshree's words took swords in their hand and prepared for the fight. Longshree asked his father-in-law to escort the Jat Chiefs to safety as she and the brave women are fighting the Mughal now. The Brave women came out of the Fortress. Jahan Khan started laughing and taunting the women warriors. Soon the Battle started and each Jat women fought like a lioness. In the middle of the Battle Longshree Devi killed Jahan Khan the commander Mughal army and the leaderless Mughal army retreated for a while. Meanwhile the Jat leaders escaped. Hari Singh the commander of Raja Bishen Singh of Jaipur again laid a Siege on the Fortress. Longshree Devi and Jat women bravely fought but all perished (500 Jat men and women died including Ch.Chandra Sen).

Finally Mughal took the Fortress but none of the Jat Chiefs were captured. Ch.Chandra Sen and his family died but fulfilled there promised. Longshree Devi and other would always be remembered for there utmost bravery and chivalry.