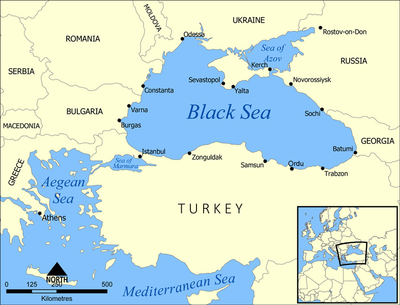 Maeotis was a lake mentioned by Arrian, historian of Alexander the Great. It is the present Sea of Azov.[1]

Sea of Azov is a sea in Eastern Europe. To the south it is linked by the narrow (about 4 km ) Strait of Kerch to the Black Sea, and it is sometimes regarded as a northern extension of the Black Sea. The sea is bounded in the north and in the west by Ukraine, in the east by Russia. The Don and Kuban are the major rivers that flow into it. There is a constant outflow of water from the Sea of Azov to the Black Sea.