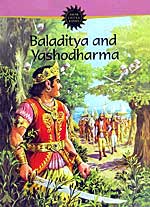 Yasodharman (532 AD) (यशोधर्मा) (also called Yashôdharman) was the king of Malwa, in central India, during the early part of the 6th century.

The Gupta Empire had been weakened by the attacks of the Indo-Hephthalites, known in India as the Hunas, towards the end of the 5th century, which caused it to break up into smaller states. Yasodharman defeated a Huna army in 528, which checked the Huna expansion in India. Twin monolithic pillars at Sondani in Mandsaur District were erected by Yasodharman as a record of his victory. [1]

During the reign of Kumaragupta I his feudatory Bandhuvarman ruled over Mandasor as it was a major Centre of western Malwa. He belonged to the Aulikara family which perhaps ruled there up to the beginning of the sixth century A.D. Two stone pillar inscriptions from Mandasor in Madhya Pradesh, one of which is dated in 532 A.D., refer to a powerful king Yasodharman. One of these inscriptions reports the victories of Yasodharman. The inscription describes him as the victor of all those lands which had not been subdued even by the Guptas. But the names of the defeated powers have not been mentioned except that of Mihirkula. It appears that Yasodharman rose to power in about 528 A.D. and continued to rule till 532 A.D., (the date of Mandasor inscription) but by 543 A.D. his power must have been eclipsed. [2]

Three inscriptions of Yasodharman have been found in Mandsaur. One of these is of samvat 589 (532 AD). Yasodharman had acquired the title of Vikramaditya. [3] He started the vikram samvat calendar of Hindus based on Lunar movements. The Kashmiri poet Kalhana has mentioned about three Kalidasas. The second Kalidasa, who wrote the books 'Raguvansha' and 'Jyotirvidabharan', was court poet of Yasodharman. Kalidasa has mentioned the victories of Yasodharman as 'Raghu-digvijaya'. His rule extended from Himalayas in the north to Travancore in south. The ruler of Magadha had become his friend. Chinese traveler Faxian visited India during his rule. [4] The victory of Yasodharman is mentioned in the sentence “Ajay Jarto Hunan” in the grammer of Chandra of the fifth century. This mention in the phrase sentence अजय जर्टो हुणान or “Ajay Jarto Huṇān”, refers to the defeat of Huns by the Jats under the leadership of Yasodharman. [5]

Virk Dynasty of Malwa: Ram Sarup Joon[8] writes that .... V D Mahajan, in his History of Ancient India has called this dynasty Mokhari. The founder of this dynasty was Sangh Verma, The capital was Mandsor. They ruled during the period Gupta from 335 to 385 AD Two famous princes of this family were Chandra Verma and Nar Verma. Chandra Verma left Malwa and established his own Kingdom of Pusharen, Nar Verma ruled Mandsor. According to a tablet excavated at Ganga Dhar, his son Vishnu Verma was a ruler of independent ideas. His sons were Bandhu Verma and Bhim Verma. When Gupta power rose, Bhim Verma accepted their suzerainty and carried on as the Vassal of Kausambi.

Three edicts of this period were excavated at Mandsor.

These read as follows: -

"The country which was neither ruled by the great Gupta nor invaded by Huns was ruled by King Yashodharman."

"Kings from Lohita River in the East to the sea in the West and from Himalayas in the North to Mahendra Parvat in the South, prostrate before him."

"Even the Mighty ruler Mehrkul bows before him."

Yashodharman Virk: As a result of invasion by Huns, Guptas lost power, At the same time Yashodharman gained power. He has been described as the son of Sangh Varma.

History of the Jats, End of Page-60

The Guptas joined forces with Yashodharman and defeated the Huns. On a memorial pillar elected by Yashodharman at Biana, it is inscribed that Yashodharman's father Vishnu Vardhan had gained the title of Maharana. This is confirmed by what has been printed on Page 342 of a book Nagri Pracharni Patrika. In the same book are also mentioned the atrocities committed by the Huns.

Huns clashed with the Jats in continents, Europe and Asia. Huns were responsible for destruction of Jat Power Nevertheless they were not let off lightly. They invaded, they destroyed, but they never ruled. In Europe they rolled their way upto Italy where they met Jats, who have been called Goths in historical records, and were bounced back. In India Yashodharman who consequently conquered the whole of Northern India had repulsed them.

Mr. Alien quotes from Rajatarangini that while Bala Ditya defended Magadha, Yashodharman made Meherkul a prisoner but released him after sometime.

Benist on pages 318 and 319 of this book 'Early History' has also confirmed the fact that Mehrkul was imprisoned by Yashodharman.

Yashodharman's son Siladitya was a follower of Buddhism. Chinese Pilgrim Huen Tsang writes about him that a Vaisnavite king drove him out of his kingdom. Siladitya took asylum with the king of Kashmir. After some time, with the help of king Paro sen (Pravarasena), he re conquered his lost kingdom.

After the death Siladitya, his kingdom splintered into small groups and disintegrated.

History of the Jats, End of Page-61

Who was the conqueror of the Hunas?

Hukum Singh Panwar writes:[9] After all, who was this conqueror of the Hunas?

It goes without saying that the Tukharas (Tusharas), Kankas or Kang, Aulikaras or Aulikas or Aulakhas, Bains or Bainswalas, Virkas or Birkas, are all the names of the Jat tribes and they claim no connection with the Jartikas of the Great Epic. But the Sanskrit scholars of the medieval period seen to have used the so-called sanskritised term Jarta for the warrior chiefs of such tribes without specifically mentioning their names. Hence they seem to have taken a cue from the suggested Jartikas thrown up by the Epic to perpetuate their gloomy picture in the popular mind, otherwise they could have easily used for those tribes the term Jat or Jatt or Zutt which had, without any shadow of doubt, come to be applied to various warrior tribes of north-western India since the time of Panini and Herodotus112.

A signal challenge here has been the evident intention of various subsequent scholars, acting as authorities but with apparent racial and religious bias to confuse Jat and Jarta in the mind of general public. The term Jartika or Jarta has come down to be notorious for symbolsing all impurity and indecencies. The purpose of its use for the Virka

The Jats:Their Origin, Antiquity and Migrations: End of page 58

conquerors of the Hunas was not to represent the former as Jat but to decry them and to dilute and pollute the perfume of their heroic and historical deeds. The version of their absurd origin, highlighted by Buddha Prakash113, as "chimerical offspring of the union of a prince and a she-wolf, (a biological impossibility) further strengthens our suspicion regarding the intention of the scholar vis-a-vis the Jats. The Virkas were a republican Vahika warrior tribe. Instead of giving credit to their martial qualities they were denounced as sons of a she-wolf, if not those of a bitch. 'The etymology of Vahikas from the two imaginary demons, Bahi and Heeka, residing in the Vipasa river, is considered fanciful by the learned scholar, but even then, they are said to have degenerated the people of the Panjab, conveying probably the concealed sense that they, too, are the sons of the demons. Above all, the same scholar refreshes, rather authoritatively, in the popular psyche, the idea that the admixture of the Jarttikas or Jartas with the Madras etc. led to the degeneration of the latter's character. He seems to be so much convinced with the version of the Epic as if he himself accompanied the Jartas in the Madradesa. What a pity, that an insignificant "jarta-fish" spoiled the whole water of Vahika rivers and her warriors, and a pinch of Jarttika Yoghurt" turned the whole milk of all the Vahika Madras sour! The normal tendency is for new-comers to be coloured by the culture of the majority, for every body follows the dictum: "while in Rome, do as the Romans do". What a surprise, that the Jartikas escaped the civilizing influence and acculturation by the highly advanced Vahika tribes; instead, they barbarised the latter'. The Brahman writers have made wide use of the formula: "Give the dog a bad name and hang it". The Jats were named as Jartas and were defamed throughout Indian history.

No less confusing is the view of C.V. Vaidya, according to whom the Jats, on the one hand, are "the purest of the Aryans, belonging to the Solar race", but, on the other hand, the Shudras in modern opinion for following the Vedic practice of widow marriage and the noblest profession of agriculture and animal husbandry besides their arms, and connects them with the denounced Jarttikas of the Karna Parva of the Mahabharata. He tries to establish his assertion with the statemate, 'Ajaya Jarto Hunan' of Chandragomin of the fifth century A.D. A close analysis of Vaidya's assertion also compels us to remark that the Jats, as descendents of the Solar race of the Aryans, lose their ancestral lustre

The Jats:Their Origin, Antiquity and Migrations: End of page 59

As soon as they are connected with "the Jarttika or Jartas who were not created by the Prajapati." This eminent scholar, too, had contributed to build a psychosis that the Jats are the Jarttikas or Jartas, the immoral and the notorious people of the Mahabharata time. Had he, to whom "the: Jats are the purest [[Aryans and are the descendents of the first race, the: Solar race", disenchanted himself from the racial and religious prejudices, he could have, in all fairness to them, identified the Jats, are also called Asuras, as the progeny of Jata114, one of the seven sons of Brahma, probably from his Asuri wife. In common parlance in northern India there are only two 'devatas', the 'Jat devata' and the 'Brahmana devata' 114a, but the orthodox scholars can ill afford to pay this glowing tribute to their adversaries, the Jats, for their honourable origin from the son of Brahma.

This pillar was erected by Yashodharman commemorating his victory over the Hunas at Dashapura, (Modern Mandsaur). These are pieces of two Monolithic pillars. These bear inscription which also records the victory of Yashodharman. One of the pillar Capitals has lions seated back to back (C. 6th CAD).[14]

(L.6.) He by whom (his) head has never been brought into the humility of obeisance to any other save (the god) Sthanu; he, through the embraces of whose arms (Himalaya) the mountain of snow carries no longer the pride of the title of being a place that is difficult of access; he to whose two feet respect was paid, with complimentary presents of the flowers from the lock of hair on the top of (his) head, by even that (famous) king Mihirakula, whose forehead was pained through being bent low down by the strength of (his) arm in (the act of compelling) obeisance: 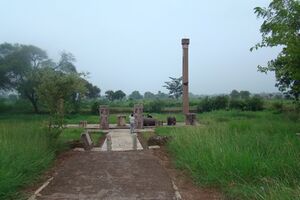