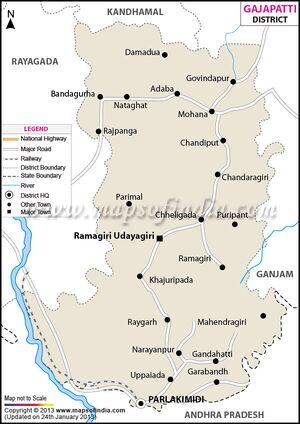 Location of Mahendragiri in Gajapati district

Mahendra Mountains (महेंद्र पर्वत) is a mountain range described in the Indian epics Ramayana and Mahabharata.

It is identified to be the part of the mountain ranges called Mahendragiri (महेंद्रगिरि) in the east coast of India (Eastern Ghats), that falls in Gajapati district of Orissa.

Mahendra (महेन्द्र) is mentioned by Panini in Ashtadhyayi. [1]

Mahendragiri, is a mountain peak at in the Paralakhemundi (or Parlakimidi) subdivision of the district of Gajapati, Orissa, India.[2] It is situated amongst the Eastern Ghats at an elevation of 1,501 metres.

The puranic mountain Mahendragiri is situated in Paralakhemundi, Gajapati district. Legend says that it is the place where Lord Parashurama stays and does tapasya. Temples built by Pandavas are seen. The main festival here is Shivaratri, the worship of Shiva, the guru or percepter of Lord Parashurama.

Mahendraparvata (Hindi: महेन्द्रपर्वत, Khmer: មហេន្ទ្របវ៌ត) is an ancient city of the Khmer Empire era in Cambodia. The existence of the city has been known for decades, but much of it lay concealed by forest and earth. The city was uncovered by an archaeological expedition led by Jean-Baptiste Chevance and Damian Evans in 2012 with the aid of airborne laser scanning technology called LIDAR.

Etymology: The name Mahendraparvata means "Mountain of the Great Indra". It is derived from the Sanskrit words महेन्द्र (Great Indra, a title of the Hindu god Indra) and पर्वत (mountain) and is a reference to the sacred hill top site commonly known as "Phnom Kulen" today where Jayavarman II was consecrated as the first king of the Khmer Empire in 802. The name is attested in inscriptions on the Angkor-area Ak Yum temple.[3]

Expedition: The multi-year archaeological expedition to find Mahendraparvata was co-led by Damian Evans of University of Sydney and Jean-Baptiste Chevance of London's Archaeology and Development Foundation. The team announced their initial findings in June 2013. A key feature of the expedition was its use of helicopter-mounted Lidar technology to scan the Phnom Kulen area and then map the city layout. The scanning phase involved seven days of helicopter operations. The Lidar results confirmed ground-based research by previous archaeologists. But, according to Chevance, before this they "didn't know how all the dots fitted, exactly how it all came together".[5][6]

The ground phase of the expedition traversed goat tracks and watery bogs, the team having got to their starting point by motorbike. Hazards included landmines. They initially uncovered five new temples. Eventually, using the Lidar data, 30 previously unidentified temples were discovered. In addition to the temples, their research showed the existence of an elaborate grid-like network of roads, dykes and ponds forming the city. Dr. Evans also noted that expedition imagery shows that the area became deforested, and he theorises that the impact of this, and water management issues, led to the civilisation's decline.[7][8]

History: The expedition team have dated Mahendraparvata's origins to 802 AD. Thus the city predates Angkor Wat by about 350 years.[9]

The city's origins date to the reign of Jayavarman II, considered the founder of the Khmer Empire. His reign was consecrated on the sacred mountain of Mahendraparvata, known as Phnom Kulen in contemporary Cambodian.[10][11] The city he founded at Mahendraparvata was one of three capitals, or courts, of Jayavarman II's reign, the others being Amarendrapura and Hariharalaya.[12]

The 1936 expedition of French archaeologist and art historian Philippe Stern had also explored the Phnom Kulen highlands. He discovered some previously unknown temples and Vishnu statues and described the area as the first true temple mountain. But the area, while being the source of rivers flowing south to the Tonle Sap, was remote. Later in his reign, Jayavarman II moved to Hariharalaya where he died in 835 AD.[13]

It is the place where Bhargava Rama or Parashurama spending his days of life, as he is one of the chiranjeevi or having life up to pralaya. This place was visited by Arjuna as part of his pilgrimage.

The Mahendra mountain is associated with east direction which clearly says that it is non other than Eastern Ghats. It is associated with mythological stories from the Ramayana as Mahendra Parvata (mountain). It is a 'Kula Parvata' along with Malaya, Sahyadri, Parijatra, Shuktiman, Vindhya and Malyavan.[14] In the Puranas and Mahabharata [we read] that Parashurama practiced penance for a long time on the Mahendra mountain.[15]

Kishkindha Kanda Sarga 42 - Sugreeva sends troops to west side to search for Sita under the leadership of Sushena, the father of lady Tara. Describing the various provinces like Surashtra, Balhika and Chandrachitra (Mathura), Western Ocean, River Sindhu and magnificent mountains that are situated at the northwest of India, cities like Murachi, Jatapura, Avanti and Angalepa and also the ocean down south to it, namely the present Arabian Sea and almost up to Persian provinces, he orders monkey troops to return within one month's time. Mahendra is mentioned in Ramayana (IV.42.35,36).[16]...."On which mountain the distinguished Mahendra, whose horses are green and who is the controller of demon Paka, is anointed by gods as their king, such a mountain is this named Mt. Megha, or Mt. Meghavanta, which you have to scour. (4.42.35)

"On going further from that best mountain ruled by Mahendra, namely Mt. Meghavanta, you shall go to the range of sixty thousand golden mountains. (4.42.36)

Vana Parva, Mahabharata/Book III Chapter 83 mentions names of Pilgrims. Mahendra Parvata (महेन्द्र) (Tirtha) is mentioned in Mahabharata (III.83.14).[17]....Proceeding next to the mountain called Mahendra (महेन्द्र) (III.83.14), inhabited (of yore) by Jamadagnya , and bathing in Ramatirtha (राम तीर्थ) (III.83.14), a person acquireth the merit of the horse-sacrifice.

Mandasor Pillar Inscription of Yashodharman year 532 AD : This pillar was erected by Yashodharman commemorating his victory over the Hunas at Dashpura, (Modern Mandsaur). These are pieces of two Monolithic pillars. These bear inscription which also records the victory of Yashodharman. One of the pillar Capitals has lions seated back to back (C. 6th CAD).[20] We find mention of Mahendra mountains in L-5 of this Inscription.

Alexander Cunningham[22] writes that In the seventh century, the capital of the kingdom of Kie-ling-kia, or Kalinga, was situated at from 1400 to 1500 li, or from 233 to 250 miles, to the south-west of Ganjam.[23] Both bearing and distance point either to Rajamahendri on the Godavari river, or to Koringa on the sea coast, the first being 251 miles to the south-west of Ganjam, and the other 246 miles in the same direction. But as the former is known to have been the capital of the country for a long period, I presume that it must be the place that was visited by the Chinese pilgrim. The original capital of Kalinga is said to have been Srikakola, or Chikakol, 20 miles to the south-west of Kalinga-patam. The kingdom was 5000 li, or 833 miles, in circuit. Its boundaries are not stated ; but as it was united to the west by Andhra, and to the south by Dhanakakata, its frontier line cannot have extended beyond the Godavari river, on the south-west, and the Gaoliya branch of the Indravati river on the north-west. Within these limits, the circuit of Kalinga would be about 800 miles. The principal feature in this large tract of country is the Mahendra range of mountains, which has preserved its name unchanged from the time of the composition of the Mahabharata to the present day. This range is mentioned also in the Vishnu Purana, as the source of the Rishikulya river, and as this is the well-known name of the river of Ganjam, the Mahendra mountains can at once be identified with the Mahendra Male range, which divides Ganjam from the valley of the Mahanadi.

Alexander Cunningham[24] writes: The Calingae are mentioned by Pliny,[25] as occupying the eastern coast of India below the Mandei and Malli, and the famous Mount Maleus. This mountain may perhaps be identified with the high range at the head of the Rishikulya river, in Ganjam, which is still called Mahendra Male, or the " Mahendra mountain."