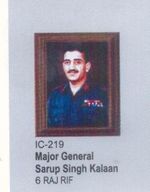 Major General Kalaan received his education at Jat High School, Hissar, Anglo Sanskrit High School, Ambala City, Government College, Rohtak and St Stephen College, Delhi. He joined the 319 Jat Regiment as a Y. Cadet and from there rose to the rank of Major General. He was awarded the Military Cross (MC) during World War II. He was also awarded Maha Vir Chakra (MVC) for his courage in the 1965 India-Pakistan War and retired from the Indian Army in 1966.

During this war, Major General Swarup Singh Kalaan was in command of the 19 Infantry Division in the Uri-Baramula-Gulmarg Sector. The first report of Pakistani infiltration was received in his area. He planned and executed operations to hunt the infiltrators, capture their bases and block routes of infiltration. In order to capture the Hajipur Pass and the subsequent link-up towards Poonch, he himself led his troops against the well entrenched Pakistan Army posts. They managed to throw out the enemy from their well guarded positions. He succeeded in his mission by showing exemplary leadership, determination and courage in the best traditions of the Indian Army.[1]

Back to The Brave People