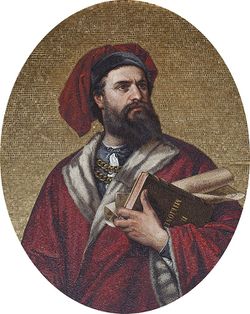 Mosaic of Marco Polo displayed in the Palazzo Doria-Tursi, in Genoa, Italy

Marco Polo (1254 – 1324) was a merchant traveller from Venice, Italy. Account of his travels is recorded in Livres des merveilles du monde (Book of the Marvels of the World, also known as The Travels of Marco Polo, c. 1300), a book that described to Europeans the wealth and great size of China, its capital Peking, and other Asian cities and countries.

He learned the mercantile trade from his father and uncle, Niccolò and Maffeo, who travelled through Asia and met Kublai Khan in Mongolia. In 1269, they returned to Venice to meet Marco for the first time. The three of them embarked on an epic journey to Asia, returning after 24 years to find Venice at war with Genoa. Marco was imprisoned and dictated his stories to a cellmate. He was released in 1299, became a wealthy merchant, married, and had three children. He died in 1324 and was buried in the church of San Lorenzo in Venice.

Marco Polo was not the first European to reach China but he was the first to leave a detailed chronicle of his experience. This book inspired Christopher Columbus and many other travellers. There is a substantial literature based on Polo's writings.

The most respected traveller 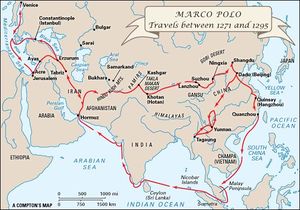 Today there are a school of experts conducting research and authentication of Marco Polo and his Travels. Much of what he wrote, which regarded with suspicion at medieval time was, confirmed by travelers of the 18th and 19th centuries. Marco Polo is receiving deeper respect than before because these marvelous characters and countries he described did actually exist. What's more interesting is that his book becomes great value to Chinese historians, as it helps them understand better some of the most important events of the 13th century, such as the siege of Hsiangyang, the massacre of Ch'angchou, and the attempted conquests of Japan. The extant Chinese sources on these events are not as comprehensive as Marco's book.

Although Marco Polo received little recognition from the geographers of his time, some of the information in his book was incorporated in some important maps of the later Middle Ages, such as the Catalan World Map of 1375, and in the next century it was read with great interest by Henry the Navigator and by Columbus. His system of measuring distances by days' journey has turned out for later generations of explorers to be remarkably accurate. According to Henry Yule, the great geographer: "He was the first traveler to trace a route across the whole longitude of Asia, naming and describing kingdom after kingdom.....". Today topographers have called his work the precursor of scientific geography.