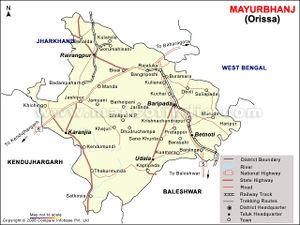 Mayurbhanj District is an administrative district of Orissa state in eastern India. The district is situated in the northern part of the state of Orissa. Baripada city is the district headquarters.

It has four subdivisions: Baripada, Karanjia, Udala, and Rairangpur. Mayurbhanj was a princely state (Gadajata) of British India, which merged with the state of Orissa on January 1, 1949. Mayurbhanj is famous for its Chhau dance. North Orissa University is located at Takatpur, Baripada (District Headquarter) in Mayurbhanj District. Baripada is the District headquarters of Mayurbhanj. The Mayurbhanj Palace, temples of Lord Jagannath & Mata Ambika are situated here among others. One of the national park for tiger is situated in the district which is known as Shimilipal.

Khiching (149 Kms) - The temple of Kichakeswari at Khiching, built entirely of chlorite slabs is unique of its kind in India. A plethora of other temples also dominate the place some of which are still in active worship. The small museum situated here boasts of highly important historical specimens of sculpture and art.

Bhimkund [162 Kms] - About 40 Kms.from Karanjia, near Booring village in Thakurmunda P.S. is the sacred pool BHIMKUND" in the river Vaitarani. The legend reveals that Bhima, the second Pandava used to take his bath in this pool when the Pandavas were passing their incognito life in Birat Nagar, said to be the present Kaptipada. Here river Vaitarani flows through a gorge in steps forming a series of picturesque rapids until it settles down in the pool called "BHIMKUND". It is encircled by precipitous stone wall. During Makar Festival in the month of January thousands of people gather here to take their holy dip. The place can also be approached from Dhenkikote (20 Kms.) on S.H. No 11 connecting Keonjhar and Panikoili. The place is ideal for picnickers.

Manatri - Only 40 Kms. from Baripada is the time honoured shrine of Kakharua Baidyanath (Temple of Lord Shiva) Being surrounded 3 sides by the Water channels of "Kundi" [Water channel] and the Gangahar river, it is a sacred place of repute. The temple itself is a fine specimen of Orissa's architecture. This place aglows on the occasion of Shivaratri festival and thousands of devotees gather here on auspicious days. Tradition ascribes that a King of Somavansi dynasty was attacked with leucoderma, his whole body being depigmented with white patches like water melon (Kakharu) was subsequently cured by the grace of the deity. Some Oriya inscriptions of Mayurbhanj Royal Family are seen on the temple walls. About one kilometre west of the temple are the remains of an ancient fort and 8 Kms east the ruins of Kuradiha Gada.

Simla - 25 Kms. from Baripada on the left bank of the river Burhabalanga, Simla is famous for housing the shrine of Simileswar Siva. Hundreds of pilgrims visit the shrine everyday. The picturesque scenery of the place attracts group picnickers. A big fair is held on Sivaratri day which continues for a week.

Kuchai - The excavated prehistoric site of Kuchai 8 kms north of Baripada is known for yielding neolithic possessions of man. Pottery found with neolithic implements speak of occurrence of a microlithic industry of the late Stone Age in Mayurbhanj district. Kuchai is on the way from Baripada to Similipal.

Kuliana - Located at a distance of 17 Kms. from Baripada on way to similipal. Kuliana is rich with palaeolithic artifices.

Mayurbhanj had the distinction of being administered by two contemporaneous medieval ruling families named as "Mayurs" and "Bhanjas" in unbroken continuity for over a thousand years, until the merger with the state of Orissa on 1st January,1949.[1]

A Tak kingdom is mentioned by Hiuen-Tsang (631-643 A.D.) It is mentioned as situated towards east of Gandhara. Hiuen-Tasng Gives its name as Tekka, and the History of Sindh, ChachNama, mentions it as Tak. Its capital was Shekilo (Sakala, modern Sialkot) and formerly King Mihiragula was ruling from this place. In seventh century A.D. Its people were not preeminently Buddhists, but worshiped the sun, too. Abhidhana Chintamani Says that Takka is the name of Vahika country (Punjab). For what follows, we are indebted to Chandrashekhar Gupta for his article on Indian coins. [3] The Tanks must have come to India, Prior to fourth century A.D. i.e. with the Kushana. And with the Kushanas, they must have spread up to Bengal and Orissa, like the Manns and Kangs who spread into southern Maharashtra and the Deccan. In Orissa, the Tanks, had their rule in Orissa proper, Mayurbhanj, Singbhoom, Ganjam, and Balasore Districts. They are called by historians as “ Puri Kushans” or Kushanas of Puri (Orissa). Their coins have been found at Bhanjakia and Balasore (Chhota Nagpur) and these coins have the legend Tanka written in Brahmi script of the fourth century A.D. Allan suggested the reading Tanka as the name of a tribe “ [4] and others generally accepted the reading Tanka as correct. [5] Allan placed them in the third or early fourth century A.D., while V.A. Smith placed them in the fourth or fifth century A.D. ; R.D. Bannerji called them “ Puri Kushanas” [6]

Back to Jat Kingdoms in Ancient India