Najafgarh (नजफगढ़) town, situated in Jat heartland of South West Delhi , is a fulfledged constituency of Delhi Vidhan Sabha and a tahsil (there are 27 villages in this tehsil).

An old, historical town, named after Mughal army commander Najaf Khan, it is well connected by bus service with Gurgaon (Haryana) and all parts of Delhi. 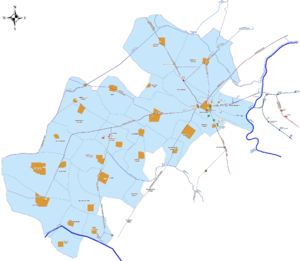 Delhi Metro has also established its depot near Najafgarh. The old town, inhibited by Muslims before 1947, is now housed by Punjabi settlers, engaged in business and shop-keeping. Its outer colonies, mostly unauthorised, and erected on agricultural lands in recent years, are a mixture of Jat, Yadav, Ahir and Brahmin population.

"Dilli Darwaza" is an old monument of Moghul period. A few kilometres from the town (towards Bahadurgarh, Haryana), there is a huge CRPF camp and a Delhi Police Training Centre.

Najafgarh is a small town of about 4,000 inhabitants situated 17 miles south-west or Delhi along a metalled road: Nangloi Railway Station on the Southern Punjab Railway is about 6 miles off to the north. On entering the town from Delhi one passes through a quaint old gateway studded with spikes, a relic of the strenuous times through which the town must have passed, and one finds that the town consists of well built houses on either side of three metalled streets. Two of these are parallel and the third which connects them forms an oblong bazar. The town includes a thana school with boarding house, a girl‘s school, dispensary, and small municipal office. The Thana is located in a picturesque old fort from the battlements of which can be obtained a good view of the surrounding country. There is a good rest-house situated in an old garden and close by is a house built in the middle of a ber garden by Bishen Singh, the leading Bhara of the place. The Honorary Magistrate, Rai Bahadur Raghnath Singh of Mitraon, holds his court in this town. Najafgarh is of historical interest in that a battle was fought there during 1857. The income of the notified area, derived mainly from house tax, is about Rs.1,200 per year, the income tax paid by the residents is about Rs 1,060 and the village lands of the mauza are assessed at Rs 1,400.