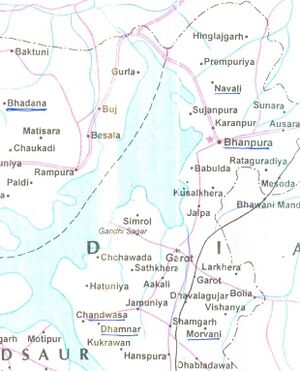 Taxakeshawar (तक्षकेश्वर) or Takhaji (ताखाजी) is a place of religious and historical importance with temple of Taxaka at village Navali in Mandsaur district in Madhya Pradesh. It is situated at a distance of 22 km from Bhanpura town on Hinglajgarh road. [1]This is the site of serpent king taxak , where he is worshiped as Taxakeshawar but the local people call him Takhaji. Curiously enough he shares the worship of the country folk with Dhanvantri, the Indian Aesculapius. [2][3] The shrine in question stands on a most romantic spot from village Navali[4] situated on the table land at the foot of which Bhanpura lies. [5]

Naoli, December 5th,1821, twelve miles. — The road runs through one continued forest, which would have been utterly impassable but for the hatchet Half-way, is the boundary between Bhynsror and

[p.658]: Bhanpoora, also an ancient appanage of Mewar, but now belonging to Holcar. Naoli is a comfortable village, having the remains of a fort to the westward.

In the evening I went to visit Takaji-ca-coond, or ' fountain of the snake-king. It is about two miles east of Naoli ; the road, through a jungle, over the flat highland of Pathar, presents no indication of the object of research, until you suddenly find your- self on the brink of a precipice nearly two hundred feet in depth, crowded with noble trees, on which the knotted koroo was again conspicuous. The descent to this glen was over masses of rock ; and about half-way down, on a small platform, are two shrines ; one containing the statue of Takshac, the snake-king ; the other of Dhunantra, the physician, who was produced at the ' churning of the ocean'. The coond, or fountain, at the southern extremity of the abyss, is about two hundred yards in circumference, and termed a'thag, or ' unfathomable,' according to my guide, and if we may judge from its dark sea-green lustre, it must be of considerable depth. It is filled by a cascade of full one hundred feet perpendicular height, under which is a stone-seat, sacred to the genius of the spot. At the west side issues a rivulet, called the Takhali, or serpentine, which, after pursuing a winding course for many miles, some hundred feet below the surface of the Pathar, washes the eastern face of Hinglazgurh, and ultimately joins the Amjar. Ghassi, my native artist, is busy with the effigy of the snake-king, and Dhunantra, the Vidya. From the summit of the plateau we had a view of the castle of Hinglaz, celebrated in Lord Lake's war with the Mahrattas, and which was taken by Captain Hutchinson with a few men of the Bengal artillery.