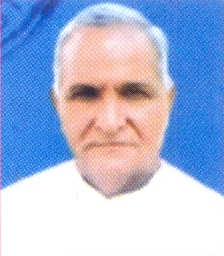 Narayan Singh Burdak (नारायणसिंह बुरडक) is a senior politician of Indian National Congress from Sikar district in Rajasthan. He has been Pradesh Congress Committee President of Rajasthan till 13 April 2005. Earlier he has been a minister in Rajasthan government in 1988-89.

He has been seven times MLA and has a strong hold in his assembly constituency Danta Ramgarh. He was first time elected MLA in 1972 from Danta Ramgarh. Prior to this he served Sarpanch, Pradhan and Zila pramukh. His first election was at Panchayat level in 1954. He served Zilapramukh for 17 years. From 1972 to 2013 he contested 10 assembly elections and won seven of these. The Octogenarian is still Strongest Jat Leader from Shekhawati and is reverentially called Bhismpitamaha of politics in Shekhawati.[1]

84 year old Jat leader has announced retirement from active politics making way for his son Virendra Singh Burdak, who is also in politics for past few decades and is a former Pradhan from Danta Ramgarh in Sikar district of Rajasthan. [2][3]