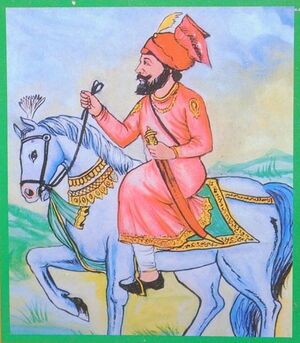 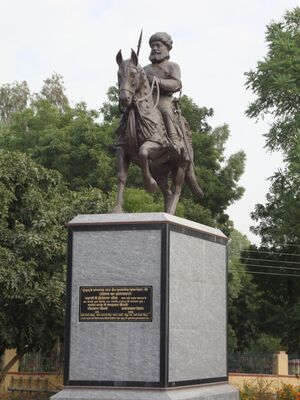 Location of Jalalabad Afghanistan on Kabul to Peshawar Road

Panini has mentioned Nihara amongst the Mountaineer Sanghas. Their location at that time was Nagarahara or Jalalabad in Afghanistan, this becomes clear from following paragraphs:

V S Agarwal [13] writes about Mountaineer Sanghas – A very important group of martial Sanghas comprised those occupying some parvata or mountainous region in north-west India..... The Markandeya Purana refers to mountain-dwellers of the west, including such names as Nihāras (Nigrahāra of Vayu, same as Nagarahāra or Jalalabad where Hṛidgola or Hiḍḍā is situated) and the Haṁsamārgas (modern Hunza in the north of Dardistan). Thus country of mountaineers extended from Kashmir to Afghanistan and most of the people settled in these mountains and their valleys were of the Ayudhajivin class.

V. S. Agrawala[14] mentions the names of Ayudhjivi Sanghas in the Panini's Sutras which include Trigarta-Shashṭha (V.3.116) – the league of six Trigartas. Trigarta stands for three valleys, viz. , those of the rivers Ravi, Beas and Sutlej. The Trigartas represented a second cluster of mountainous Sanghas being counted amongst Parvatāshrayiṇa, along with the Niharas (Nīhāras), Dārvas, Karṇa-Prāvaraṇas, etc.,

Ram Swarup Joon[15] writes about Nehra - Naro, Bhatta, Nhaar: Their ancestor was Narhari-Dev and Nahhara. The Nehra hills of Rajasthan were their territory. They are said to be a branch of the Sindhu gotra. Nehra in Jaipur was the first capital in olden times. As they received gifts they were also called Bhainteivan and Bhatta.

B S Dahiya[16] writes that Nahra/Sangha - Both these clans are mentioned in the Sundha Hill (Jodhpur) inscriptions of Chechigadeva Chauhan.[17] The Nahras may be the Neuri of the ancient Greeks, and the Naharians of the Egyptian Pharaohs.

According to Bhim Singh Dahiya they are to be identified with Nara or Nehra clan of the Jats, the Nairi of West Asia. Assyrian inscriptions of Shalmaneser I (ca. 1270 BC) first mention a loose confederation called the Urartu or Nairi in North-East Anatolia, in the region around Lake Van. [18]

There is mention of Nehra people by Greek writer Megasthenes (350BC- 290BC) in his book Indica as Narae, the people who were enclosed by the loftiest of Indian mountains, Capitalia. The inhabitants on the other side of this mountain work extensive mines of gold and silver.[19] (See at S.No.11 - Jat clans as described by Megasthenes)

Nehras were rulers of Nehrun state in Sindh at the time of attack on Sindh by Muhammad bin Qasim in 710. Present Hyderabad (Pakistan) city was settled on the land of Nehrun. The Hyderabad city was then named Nehrun Kot and was called the heart of the Mehran. [20]

James Tod in "Annals and Antiquities of Rajasthan" has mentioned that Bika - the sixth son of Joda was spreading his rule in Jangladesh. He decided to build capital of his state on land belonging to Nehra jats. Nehras agreed to give the land for capital on the condition that their clan name will be included in the name of capital. So the name of caital of the state of Bika was : Bika + Nehra = Bikaner. The city of Bikaner was founded in 1488. [21] 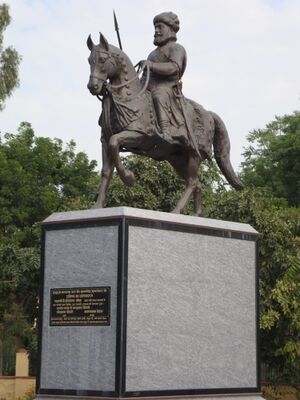 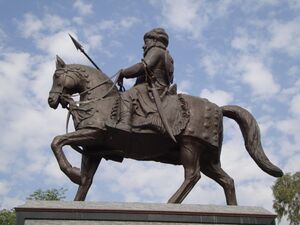 After Sindh Nehras have been mentioned by James Tod to be living in Jangladesh area of Rajasthan when the Rathores annexed it. [22] According to James Tod, the spot which Bika selected for his capital, was the birthright of a Nehra Jat, who would only concede it for this purpose on the condition that his name should be linked in perpetuity with its surrender. Naira, or Nera, was the name of the proprietor, which Beeka added to his own, thus composing that of the future capital, Bikaner.[23]

Nehra Jats ruled in Rajasthan over an area of 200 sqaire miles. In fifteenth century Nehras ruled at Narhar in Jhunjhunu district. At Naharpur, 16 miles down below the Nehra Hill, their another group ruled. At the end of 16th century and beginning of 17th century there was a war between Nehras and Muslim rulers. The Nehra chieftain Jhunjha or Jujhar Singh won the war and captured Jhunjhunu town. Later at the time of victory ceremony he was deceived by Shekhawat Rajputs and killed. Jhunjhunu town in Rajasthan was established in the memory of Jujhar Singh Nehra the above Jat chieftain. There were 1760 villages under the rule of Nehras in Rajasthan.

About Narhar, Thakur Deshraj writes that it was ruled by Nehra Jats. Nehra jats ruled in Rajasthan over an area of 200 square miles. The Nehra hills of Rajasthan were their territory. To the west of Jhunjhunu town is a Hill 1684 feet above see-level and visible from miles around. [1]. This hill near Jhunjhunu town is still known as Nehra Hill in their memory. [24] Another hill was known as Maura which was famous in memory of Mauryas. Nehra in Jaipur was the first capital in olden times. In the fifteenth century Nehras ruled at Narhar, where they had a fort. At Naharpur, 16 miles down below the Nehra Hill, there another group ruled. [25]The present Shekhawati at that time was known as Nehrawati. [26]

At the end of 16th century and beginning of 17th century there was a war between Nehras and Muslim rulers. When Nehras were defeated by nawabs, they used to offer gifts to the Nawabs on special occasions, due to this they were also called 'Shahi bhentwal'. [27]

Jujhar Singh Nehra, one day found the right opportunity and attacked Nawabs at Jhunjhunu and Narhar. He defeated the army of Nawab Sadulla Khan on Saturday, aghan sudi 8 samvat 1787 (1730 AD). The Nehra chieftain Jhunjha or Jujhar Singh won the war and captured Jhunjhunu town. [30]This is clear from the following poetry in Rajasthani Language -

The Muslim Nawab 'Sadulla Khan', in charge of Jhunjhunu, was defeated jointly by Shardul Singh and Jujhar Singh Nehra. But, as per Kunwar Panne Singh's book 'Rankeshari Jujhar Singh', Later at the time of victory ceremony Jujhar Singh was deceived and killed by Shekhawats after he was appointed the chieftain. Kunwar Panne Singh has written that after the tilak ceremony of chieftainship, Rajputs attacked him when he was at a solitary place. Jujhar Singh was surprized at this incidence and when he asked what kind of sardari he was being offered this way. He was replied that we (Rajputs) are not fools, we are making you not the live sardar but a dead sardar. You should have remained vigilent. When this news of treachery spread in in the city, there was anarchy in the Jat army and Jats became furious. It is said that at this moment a Charan sung a poetry to Shardul Singh. [31] It is clear from the poetry in Rajasthani Language -

Meaning - This state was taken by Jhunjha from Sadullekhan, he became immortal. Now your seven generations would rule over it.

Jhunjhunu town in Rajasthan was established in the memory of Jujhar Singh Nehra the above Jat chieftain. [32] [33] [34]

Bhim Singh Dahiya[36] provides us list of Jat clans who were supporters of the Chauhan when they gained political ascendancy. The Nahra clan supported the ascendant clan Chauhan and become part of a political confederacy.[37]

Dasharatha Sharma in "Early Chauhan Dynasties" [p.176] writes about Jalor Chauhan ruler - Chachigadeva. We have eight inscriptions for Chachigadeva, the son and successor of Udayasimha. These range from V. 1319 to V.1333. The earliest is the Sundha Inscription of V. 1319 edited by Dr. Kielhorn in EI, IX. pp. 74ff. Some three years earlier however than the earliest of these (which belongs to V. 1319) is the record of a pratishtha at Jalor, dated the 6th of the bright half of Magha V. 1316. It states that Padru and Muliga put a gold cupola and gold dhvaja on the temple of Shantinatha at Suvarnagiri in the reign of Chachigadeva (Kharataragachchhapattavali. p. 51).

"Hating his enemies as thorns" states the Sundha Inscription "he destroyed the roaring Gurjara lord Virama," enjoyed the fall of the tremulous (or leaping) Patuka, deprived Sanga of his colour and acted as a thunderbolt for the mountain, the furious Nahara".

Dasharatha Sharma writes that The "furious Nahara" of the inscription, again, is equally unidentifiable. But we know from Jat history above that नहराचल means Nehra Mountain. There is a mountain in Jhunjhunu called Nehra Pahad which in Sanskrit is called नहराचल. Thus Nehras were rulers in Vikram Samvat 1316 (1260 AD). [40]

Mention of Nehra in epics

In Ramayana - Balakanda Sarga 22 when King Dasharatha sends Rama and Lakshmana along with Sage Vishvamitra, in their course of travel, Vishvamitra imparts a secret knowledge by which Nairritas can not charge them either sleeping or unvigilant. [I-22-13]. Here Nairritas may be identified with Nehras.

Nehra is a Rigvedic clan according to the historian Bhim Singh Dahiya. In Rigveda it is mentioned as Narya (RV VIII/24/29).

Meaning - "Wherewith ye quickened the most sweet exhaustless flood, and comforted Vasistha, ye who ne'er decay; And to Srutarya, Kutsa, Narya gave your help,--Come hither unto us, O Asvins, with those aids."

The Rig Veda/Mandala 1/Hymn 54 shloka 6 writes about Narya as under:

In Vana Parva, Mahabharata/Book III Chapter 170 Arjuna destroys the city of the Daityas and mentions Nairritas along with Guhyas. (III.170.45)

Bhisma Parva, Mahabharata/Book VI Chapter 20 mentions about warriors of the Andhakas, Vrishnis and the Bhojas races, as also by the warriors of Nairritas and Surashtras well-armed and well-acquainted with the uses of weapons, and which was led by Kritavarman, proceeded towards the south of the army. (VI.20.14)

Shalya Parva, Mahabharata/Book IX Chapter 44 mentions names of combatants All of them came to the ceremony for investing Kartikeya with the status of generalissimo. The gods then made over to Skanda the celestial host, invincible, abounding with celestial troops, capable of destroying the enemies of the gods, and of forms like that of Vishnu.(IX.44.25)

Shalya Parva, Mahabharata/Book IX Chapter 45 mentions large bands of the mothers, that became the companions of Kumara. One of them was Nairriti (IX.45.49) 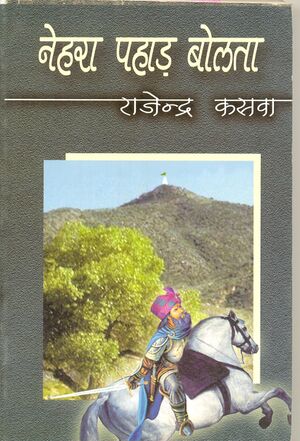 Villages in Ratlam district with population of Nehra gotra are:

Villages in Ratlam district with population of Nera gotra are:

Back to Jat Gotras /Jat Kingdoms in Ancient India