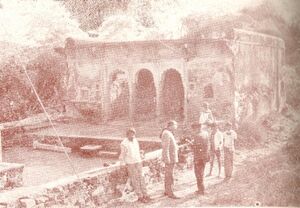 Nibrol (निबरोल ) or Nimrol is a village and site of Jat Fort in Gohad tahsil of Bhind district of Madhya Pradesh.

Nibrol is located at a distance of 3 km from Chitaura in north direction on Bhind-Mau-Chitaura Road. [1]

Various Jat clans had an important role in running the administration of Gohad state. The supreme power of the state vested in the King but the senior chieftains from Jat clans in-charge of various forts in the state used to keep a balance.

Rana Bhim Singh (1702-1755) became ruler of Gohad after death of his father Rana Jaswant Singh. Gohad became a powerful state in regime of Rana Bhim Singh. There were 125 chieftains looking after the affairs of various forts. Some prominent chieftains were: [2] (Ojha,p.60)

Rana Bhim Singh had no son. Girdhar Pratap Singh fourth and youngest son of Samant Rao Balju, of Nimrol was adopted by Rana Bhim Singh, and succeeded him on his death, 1756. But he could not rule for long as he expired in 1757. [3]

There is a small fort in Nibrol known as ‘Ranaon ki Garhi’. The fort was constructed by Gohad rulers. There are present only the ruins of the fort. On the east side of this fort is a Shiva temple where villagers worship regularly. [4]