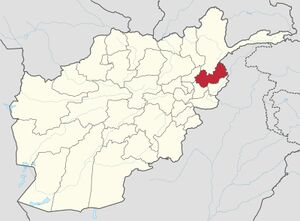 Location of Nuristan province in Afghanistan

Nuristan, also spelt as Nurestan or Nooristan, (Pashto: نورستان) is one of the 34 provinces of Afghanistan.

It is located in the eastern part of the country. It has a population of about 140,900, and Parun serves as the provincial capital.

It was formerly known as Kafiristan (کافرستان, "land of the infidels") until the inhabitants were converted from a form of ancient Hinduism, to Islam in 1895, and thence the region has become known as Nuristan ("land of illumination").

Located on the southern slopes of the Hindu Kush mountains in the northeastern part of the country, Nuristan spans the basins of the Alingar, Pech, Landai Sin, and Kunar rivers. Nuristan is bordered on the south by Laghman and Kunar provinces, on the north by Badakhshan province, on the west by Panjshir province, and on the east, by Khyber Pakhtunkhwa, Pakistan. 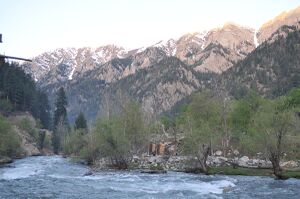 Nuristan is one of the poorest and most remote provinces of Afghanistan. Since Nuristan is a highly ethnically homogeneous province, there are few incidents of inter-ethnic violence. However, there are instances of disputes among inhabitants, some of which continue for decades. Nuristan has suffered from its inaccessibility and lack of infrastructure. Recently, the Afghan government worked on a direct road route to Laghman province, in order to reduce dependence on the road through restive Kunar province to the rest of Afghanistan. Other road projects were started aimed at improving the primitive road from Kamdesh to Barg-i Matal, and from Nangalam in Kunar province to the provincial capital at Parun.

The surrounding areas fell to Alexander the Great in 330 B.C. It later fell to Chandragupta Maurya. The Mauryas introduced Buddhism to the region, and were attempting to expand their empire to Central Asia until they faced local Greco-Bactrian forces. Seleucus is said to have reached a peace treaty with Chandragupta by giving control of the territory south of the Hindu Kush to the Mauryas upon intermarriage and 500 elephants.

Since the creation of Pakistan in 1947, Afghan politicians have been focusing on re-annexing Khyber Pakhtunkhwa and the Federally Administered Tribal Areas which are now part of Pakistan. This has led to militancy on both sides of the Durand Line. In the meantime, Pakistani politicians have been focusing to find a direct land route to Tajikistan. This requires weakening Afghan rule in Nuristan and Badakhshan provinces by secretly funding anti-Afghan rebel forces. Nuristan was also the scene of some of the heaviest guerrilla fightings during the 1980s Soviet war in Afghanistan.