Order of British India was an order of merit which was bestowed by the East India Company for "long, faithful and honourable service", beginning in 1837. The Company's powers were removed after the Indian Mutiny, and the Order was incorporated into the British honours system in 1859. 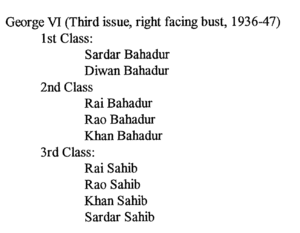 Those awarded the Rai Sahib title were usually elevated to the next rank, that of Rao Bahadur, which was in turn below the rank of Dewan Bahadur

Here is partial list of Jat Recipients of Indian Order of Merit. You may add more.

Back to Lists of Jatland