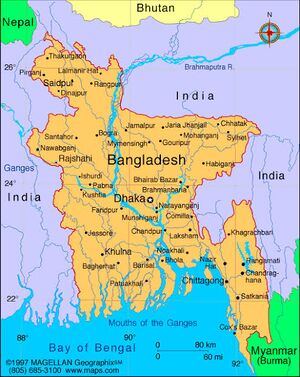 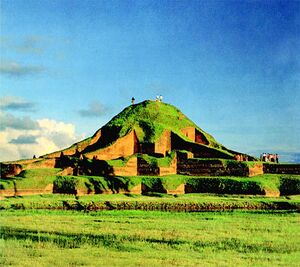 Paharpur (पहाड़पुर) is an ancient Buddhist site site in Bangladesh. It is located in Paharpur, Badalgachhi Upazila, Naogaon District, Bangladesh.

Paharpur is in insignificant border hamlet about three miles West of Jamalgunj railway station, in Bogra district of Bangadesh on the main line of Bangladesh Eastern Railway. The village, which lies in Rajshahi district, is connected with outside world only by un-metallic and dusty cart track.

Paharpur has revealed the remains of the largest Buddhist temple and monastery South of Himalayas. The huge tapering mass in the village is covered by remarkably fine banyan tree, visible from great distance as familiar landmark. Paharpur derived its name from this hill under whose shadow it rested. It was only in the year 1933-34 that the entire remains, isolated pile of conical earth mound, could be completely exposed to view.

According to the epigraphic evidence recovered from the excavations of the extensive remains of Paharpur, the monastery was named Somapura Vihara. Measuring 922 feet North-south and 919 feet East-west externally, monastery represents the biggest single "Vihara" so far known in the subcontinent. 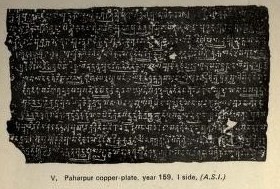 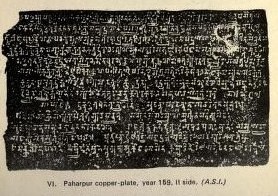 Another important discovery of the site constituted the inscribed copper plate grants and stone inscriptions, which throw light on the history of the site. The earliest is Copper Plate, dated 159 of Gupta era (478 AD), of the Budha Gupta period, found from the monastery area. It records the purchase and grant of land by Brahman couple, for maintenance of Arhats and resting place at Vihara, presided over by Jaina teacher Gahanandin and his disciple, and disciple of disciples. But how this Jaina record of land grant of earlier date found its place in later Buddhist monastery of Somapura is a matter of great controversy.

A number of stone pillar inscriptions (4 belonging to 10th and 12th centuries) discovered at the site and excavation, contain records of the donation of pillars referring to either Buddha or Tri-Ranta (Three Jewels of Buddhism: Buddha, Dharma and Sangha).

Considering the immense size and important of great Vihara, the number of metal images found at the site of the excavation is indeed insignificant. This small group consists of one ornamental bronze image of Hara Gauri in conventional style, bronze image of standing Buddha in the attitude of Protection (Ahhaya Mudra), standing naked Jaina image and bronze images of Kuvera and Ganesha. Apart from large collection of various types of pottery and other minor terracotta antiquities are 4 mutilated stucco Buddha heads of about 8th-9th century AD.