For village of this name see Palas Sikar 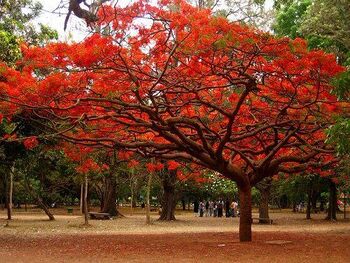 Palas (पलास) or Palasa or Butea monosperma or Butea frondosa is a tree species of Butea native to tropical and sub-tropical parts of the Indian Subcontinent and Southeast Asia, ranging across India, Bangladesh, Nepal, Sri Lanka, Myanmar, Thailand, Laos, Cambodia, Vietnam, Malaysia, and western Indonesia.[1] Palash is also the State Flower of Jharkhand.

It is a medium sized dry season-deciduous tree, growing to 15 m tall. It is a slow growing tree, young trees have a growth rate of a few feet per year. The leaves are pinnate, with an 8–16 cm petiole and three leaflets, each leaflet 10–20 cm long. The flowers are 2.5 cm long, bright orange-red, and produced in racemes up to 15 cm long. The fruit is a pod 15–20 cm long and 4–5 cm broad.[6]

Shalya Parva, Mahabharata/Book IX Chapter 36 describes the journey of Baladeva, who proceeded along the bank of the Sarasvati river. Palasa tree is mentioned in verse-58. [7]

According to Alexander Cunningham Pataliputra (modern Patna), gets name from Palasa or Butea frondosa, which still grows as luxuriantly in the province as in the time of Hwen Thsang.[9]

The plant has lent its name to the town of Palashi, famous for the historic Battle of Plassey fought there.

Historically, dhak forests covered much of the doab area between the Ganges and Yamuna, but these were cleared for agriculture in the early 19th century as the English East India Company increased tax demands on the peasants.[10]

It is used for timber, resin, fodder, medicine, and dye. The wood is dirty white and soft and, being durable under water, is used for well-curbs and water scoops. Good charcoal can be obtained from it. The leaves are usually very leathery and not eaten by cattle. The leaves are used by street food sellers to serve food placed on the leaves.