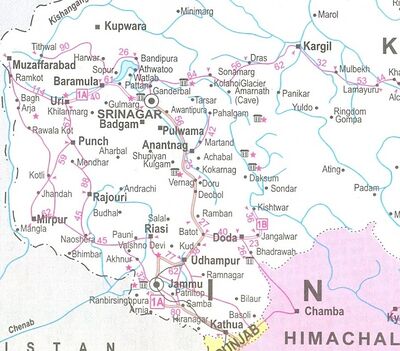 Location of Pampur in Jammu and Kashmir

Pampur (पामपुर) is an ancient historic town situated on the eastern side of Jhelum River on Srinagar-Jammu National Highway in Jammu and Kashmir. It is worldwide famous for its Saffron, so known as "Saffron Town of Kashmir". The postal code of the area is 192121. 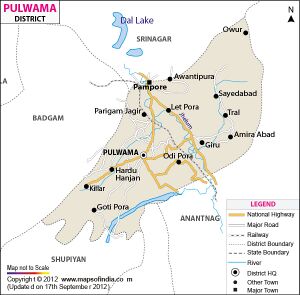 Pampore is located at 34.02°N 74.93°E. It has an average elevation of 1,574 metres. The area is about 11 km from Srinagar city centre Lal Chowk. The town is situated on the eastern bank of Veth also known as Jehlum (in Urdu). It extends from Galandar in South to Khankah Bagh in North. Nearby towns: Awantipora 17 km, Khrew 15 km, Athwajan 4 km. Nearby cities: Lal Chowk-Srinagar 11 km.

Alexander Cunningham[2] writes that Padmapura, now called Pampur, was founded by Padma, the minister of Raja Vrihaspati, who reigned from A.D. 832 to 844[3]. It is situated on the right bank of the Behat, 8 miles to the south-east of the capital, and about midway on the road to Avantipura. The place is still well inhabited, and its fields of saffron are the most productive in the whole valley.

Rajatarangini[4]tells that ....Chippatajayapira alias Vrihaspati was king of Kashmir from 795-813 AD.

Rajatarangini[5] tells that ....After Sangrāmapira, Chippatajayapira, otherwise called Vrihaspati, the infant son of Lalitapira, was made king of Kashmir. He was born of Lalitipira's concubine named Jayadevi, the daughter of Kalpapala an inhabitant of Akhuva. This daughter of Kalpapāla had been taken away by Lalitapira on account of her beauty. The maternal uncles of the present king named Padma, Utpalaka, Kalyana, Mamma and Dharmma now ruled the kingdom during the king's infancy. (IV,p.102).

Rajatarangini[6] tells that ....Padma set up a god named Padmasvami, and a town named Padmapura. (IV,p.103).

Rajatarangini[7]tells that.... Tilaka, son of Kaka, spoke thus to Bhikshu after death of Sussala — "Sussala was disliked, by all, but now it so happens that he is dead, why should his subjects desert his worthy son (Simhadeva)? Therefore O king ! instead of entering the capital, come let us make haste and enter Padmapura within one day, in order to obstruct the way of the enemies." [VIII (i),p.119]

Rajatarangini[8] tells....Sujji's soldiers were killed and the cruel Damaras of Khaṇḍduvī obstructed his way near Padmapura and waited there in order to kill him, as he was marching by that road. At this time Shrivaka left the village of Kherītalālasā with a large army and came marching this way. The Damaras mistook Shrivaka, coming with his followers, for Sujji, and fell on him and killed and plundered his soldiers. In this scuffle Meru and Sajjana, two horsemen, perished, and Malla, son of Vatta, was wounded and died in a few days. The place Udipapārnvāla had become dangerous, as the chasm there was filled with much water. Shrivaka marched out of Padmapura, fighting as he went, his army was surrounded, and some arrows entered his throat. When he was overcome with wounds, the Damaras found out that he was not Sujji, and they

[p.122]: desisted from plundering him for the sake of their old frendship with Shrivaka. The Damaras were grieved for having robbed Shrivaka and at the death of his soldiers, and went away. Sujji's passage thus became safe, as a lion is accidentally killed by a trap, and a traveller's passage is cleared.

Sujji silently marched with his army towards Padmapura, and when he had arrived near the chasm of Udipapura, the Damaras became aware of him. Sujji disregard the Damaras who plundered his infantry, treasures, arms, &c, and with this cavalry crossed the chasm and reached the place where the horses could move. Now, his fear of his enemies was gone, and he threatened them by contracting his brows, shaking his forefinger and by harsh words. He took his umbrella only and with his frightened men, he hastily entered the capital, and with tears in his eyes came to the king. On the approach of Sujji who was like the king's elder brother, the king shed tears in grief, he cast off his dread of the arrival of his foes, with the tears that he shed. [VIII (i),p.121-122]

Rajatarangini[9]tells that Uchchala was led by the Damaras, who were mostly foot soldiers, and who terrified the cavalry and once more passed through the difficult mountain path which led to Lohara. The king too again made Udayaraja Lord of of Dvara, and sent the Lord of Mandala to Lohara to subdue Uchchala. The maternal uncle of Uchchala and Sussala now arrived at Padmapura, and none of the king's ministers ventured to accept from the king the governorship of Kampana. And the king asked, with a sigh, " who is there for me? On which Chandraraja took from the king's hand the garland of investment to the lordship of Kampana. This man acted as befitted the

[p.274]: line of Jinduraja, &c., who slept with death. Thus he was made the Commander-in-Chief in the last hour of danger, just as the son of Drona was made by Duryodhana. He marched out, and drove the enemy from Padmapura. In the month of Bhadra, on the ninth bright lunar day, the usurper of Kampana (the maternal uncle of the rebel brothers) was killed at Avantipura by Chandraraja, who was slowly going on in his march of conquest. His death happened in .this wise. Leaving his army to fight near Gobarddhanadhara, he was hearing songs, attended only by few persons, when he was surprised and killed by his enemy's cavalry which went by the way along the Vitasta.

Rajatarangini[10] tells....The desire of Trillaka to attack Padmapura abated out of fear of Yashoraja and of the lord of Kampana who were at his back. During the civil war in Sussala's time, no such calamity happened to Sussala as befel his son. [VIII (ii),p. 255]