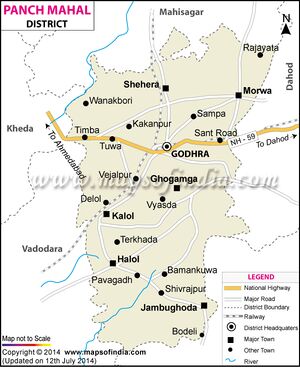 Panch Mahal (Hindi: पंचमहल, Gujarati: પંચમહલ) or Panchmahal, also Panch Mahals, is a district in the eastern Gujarat, India. In 1997, District Panchmahals was divided into two districts Panchmahals (with district headquarters at Godhra) and a new district of Dahod was created.

Panch-mahal means "five tehsils/talukas" (5 sub-divisions), and refers to the five sub-divisions namely - Godhra, Dahod, Halol, Kalol and Jhalod that were transferred by the Maharaja Jivajirao Scindia Gwalior to the British.

The history of Panchmahals district revolves around the city of Champaner. It was established in 7th century (647) in the territory of King Vanraj Chavda of Solanki dynasty.

In the 13th century, Chauhans acquired the city from Muslim rulers under Alauddin Khilji. Their rule continued until 1484, when Mahmud Begada of Gujarat Sultanate captured the city. Thereafter Godhra became center of the district under the Mughal Empire (1575 to 1727).

Panchmahal were conquered from the Mughal Empire by the Maratha general Sindhia in the 18th century. In the course of time, Sindhia dynasty became Maharajas of Gwalior and, after 1818, were forced to recognize British sovereignty. The Panch Mahals were transferred in 1861 by the Sindhias to British India, where they became a district in the Gujarat Division of Bombay Province. The British district consisted of two parts, the "western mahals" and the "eastern mahals," which were divided by the territories of Baria (Devgadh) and Sanjeli states. The western portion was for the most part a level plain of rich soil; while the eastern portion, although it comprised few fertile valleys, was generally rugged, undulating and barren, with little cultivation. The area of the British district was 1606 sq. mi., and the population was 261,020 in 1901. The administrative headquarters were at Godhra with a population (1901) of 20,915.

The ruins of Champaner, the former capital of a Hindu kingdom and later of the Sultans of Gujarat, was included in the district. It was the only district of Bombay presidency that is administered on the non-regulation system, the Collector being also the agent to the Governor General of India (Political Agent) for Rewa Kantha Agency.

The mineral products comprised sandstone, granite and other kinds of building stone. Mining for manganese on a large scale was begun by a European firm. The principal crops were maize, millets, rice, pulse and oilseeds; there were manufactures of lac bracelets and lacquered toys; the chief export was timber. Both portions of the district were crossed by the branch of the Baroda, Bombay & Central India Railways (B.B.&C.I.R) from Anand, through Godhra and Dahod, to Ratlam; a chord line was opened in 1904 from Godhra to Baroda city. The district suffered very severely from the famine of 1899-1900, and its population decreased 17% from 1891 to 1901 owing to the famine. In 1960, Gujarat State was created and Panchmhals became one of the districts in the state, with district headquarters at Godhra.