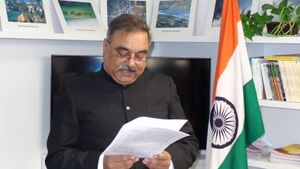 Param Jit Mann (date of Birth: 7 April 1960) belongs to Bhiwani district of Haryana. After passing his LLB, he joined Indian Foreign Service in 1987. He is proficient in Spanish language.

He served in Madrid (Spain), Sofia (Bulgaria), Mexico City (Mexico) and Brussels (Belgium). From 2006 to 2013, served as Joint Secretary in Ministry of External Affairs (MEA), New Delhi. in MEA, he worked in different capacities in the Pakistan Division, Administration, Protocol, the West Africa Division, and the Foreign Service Institute.

In 2014, he was appointed as Ambassador of India in Bratislava (Slovak Republic).

In May 2017, he was appointed as Ambassador of India in Ljublijana (Slovenia).