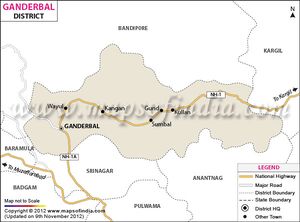 Parihasapur (Hindi:परिहासपुर, Kashmiri پرہاسپور – پرس پور) was an ancient city built in Jammu and Kashmir by Lalitaditya Muktapida (r. 724 CE–760 CE) of the Karkota dynasty and served as the capital of Kashmir during his reign.

It has been identified with present Sumbal[1] in Ganderbal district of Jammu and Kashmir.

Parihaspur was a small town 22 kilometers northwest of Srinagar in the Kashmir Valley. It was built on a plateau above the Jhelum River.[2]

The present name of the place, Paraspore,[3] is a variation of the original Sanskrit name of the city, Parihaspur, which loosely translated would mean a city of laughs or a smiling city. "Parihas" means laughter and "pur" means city.

The temples included one for Vishnu (Muktakeshva) where according to Kalhana the emperor used 84,000 tolas of gold to make the image of Vishnu. In another temple he used as many Palas of silver for the image of Parihaskesana. He also had made a statue of Buddha in copper that according to Kalhana “reached up to the sky.” The main temple was larger than the famous temple that Lalitaditya built in Martand. [4][5]

Parihaspur lost its status as a capital after Lalitaditya’s death. His son moved the royal residence. The Jhelum River is to the northeast of Parihaspur as it meets the Sind nallah at Shadpur sangam. In the past this confluence of the rivers occurred closer to Parihaspur. The change in the course of the river is not natural but was engineered by famous Soya Pandit during Raja Avanti Varman’s time (855–883 AD). With the river access gone, the city suffered greatly.

The real destruction occurred when Avanti Varman’s son Shankar Varman moved his capital to the new city of Shankarpur. According to Kalhana he cannibalized all the “good material” from these temples and palaces to build his city of Shankarpur (Pattan, Baramulla). Parihaspur however survived the pillage because Kalhana mentions that during the war between King Harsha and Uccala (1089–1101 AD), Uccala took refuge in Parihaspur. King Harsha believing that Uccala was in one of the buildings set the place on fire. He broke and melted down the statues of Parihaspur. Kalhana in a very poignant way describes the destruction in Rajatarangini, “ After this image (of Vishnu) had been broken up, heaven and earth became covered with dust, which was grey like the plumage of the pigeons.” And “For month and a half it was a land of darkness even at day-time.” The final blow to the temples came when Sultan Sikandar of Kashmir (1389–1413) destroyed them completely in the fourteenth century.[6][7]

Alexander Cunningham[8] writes that Parihasapura was built by the great Raja Lalitaditya,[9] who reigned from A.D. 723 to 760. It was situated on the right, or eastern bank of the Behat River, near the present village of Sumbal. There are still many traces of walls and broken stones on the neighbouring mounds, which show that a city must once have existed on this spot ; but the only considerable remains are a bridge which spans the Behat River, and a canal which leads direct towards Supur, to avoid the tedious passage by the river through the Wular Lake. As Parihasapura is not mentioned again in the native chronicle, it must have been neglected very soon after its founder's death. His own grandson, Jayapida, built a new capital named Jayapura, in the midst of a lake, with a citadel, which he named Sri-dwaravati, but which the people always called the " Inner Fort."[10] The position of this place is not known, but I believe that it stood on the left bank of the Behat River, immediately opposite to Parihasapura, where a village named Antar-kot, or the " Inner Fort,"

[p.102]: exists to this day. The final destruction of this city is attributed by the people to Sangkara Varmma, who reigned from A.D. 883 to 901. He is said to have removed the stones to his own new city of Sangharapura, which still exists as Pathan, 7 miles to the south-west of the Sumbal bridge. The great temple at Parihasa was destroyed by the bigoted Sikandar, who reigned from 1389 to 1413, A.D. Of this temple a curious story is told by the Muhammadan historians. Speaking of Parispur, Abul Fazl[11] says, "here stood a lofty idolatrous temple which was destroyed by Sikandar. In the ruins was found a plate of copper with an inscription in the Indian language purporting that after the expiration of 1100 years the temple would be destroyed by a person named Sikandar." The same story is told by Ferishta,[12] with the addition of the name of the Raja, whom the translator calls Balnat, which is probably a mistake for Laldit, the usual contracted form of Lalitaditya among the Kashmiris. As the difference of time between this prince and Sikandar is barely 700 years, it is strange that the tradition should preserve a date which is so much at variance with the chronology of their own native chronicles.

Only ruins in the form of large boulders, some orately carved, and in situ carved footings are left of the old city now, and the place is commonly known as "Kani Shahar" (City of Stones) to local residents.[13] Some of the finest examples of the carved figures of seated and standing atlantes have been taken to the Srinagar Museum.[14] M.A.Stein first visited the place in 1892 and was able to place each of these constructions based on ruins that he found at that time. Stein also thinks that the village Gurdan near Parihaspur comes from Govardhana. Govardhana dhara is one of the names of God Vishnu. He visited the place again in 1892 and found that many stones that he had seen in 1892 were gone. Apparently Maharaja of Kashmir was building the Jhelum cart road and using the Parihaspur ruins as road material. Stein approached the British resident at that time for help. He was able to convince the Dogra king to stop further desecration of the historic temple ruins.