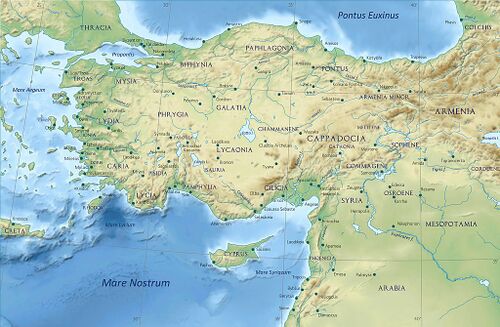 Phrygia was an ancient kingdom in the west central part of Anatolia, in what is now Asian Turkey, centered on the Sangarios River, later a region, often part of great empires.

According to Homer's Iliad, the Phrygians participated in the Trojan War as close allies of the Trojans, fighting against the Achaeans. Phrygian power reached its peak in the late 8th century BC under another, historical, king: Midas, who dominated most of western and central Anatolia and rivaled Assyria and Urartu for power in eastern Anatolia. This later Midas was, however, also the last independent king of Phrygia before Cimmerians sacked the Phrygian capital, Gordium, around 695 BC. Phrygia then became subject to Lydia, and then successively to Persia, Alexander and his Hellenistic successors, Pergamon, Rome and Byzantium. Phrygians gradually became assimilated into other cultures by the early medieval era; after the Turkish conquest of Anatolia, the name "Phrygia" passed out of usage as a territorial designation.

Inscriptions found at Gordium make clear that Phrygians spoke an Indo-European language with at least some vocabulary similar to Greek, and clearly not belonging to the family of Anatolian languages (such as Hittite) spoken by most of Phrygia's neighbors.[1] One of the so-called Homeric Hymns describes the Phrygian language as not mutually intelligible with that of Troy.[2]

According to ancient tradition among Greek historians, the Phrygians anciently migrated to Anatolia from the Balkans. Herodotus says that the Phrygians were called Bryges when they lived in Europe.[3] He and other Greek writers also recorded legends about King Midas that associated him with or put his origin in Macedonia; Herodotus, for example, says a wild rose garden in Macedonia was named after Midas.[4] Some classical writers also connected the Phrygians with the Mygdones, the name of two groups of people, one of which lived in northern Macedonia and another in Mysia. Likewise, the Phrygians have been identified with the Bebryces, a people said to have warred with Mysia before the Trojan War and who had a king named Mygdon at roughly the same time as the Phrygians were said to have had a king named Mygdon. The classical historian Strabo groups Phrygians, Mygdones, Mysians, Bebryces and Bithynians together as peoples that migrated to Anatolia from the Balkans.[5] This image of Phrygians as part of a related group of northwest Anatolian cultures seems the most likely explanation for the confusion over whether Phrygians, Bebryces and Anatolian Mygdones were or were not the same people.

Sir H. M. Elliot[6] writes ....We read over and over again in Persian history, of the deportations of entire tribes, expressly termed αυασπάστοι by Herodotus.3 Thus we have the removal of Pæo-nians to Phrygia, of Barcæans from Africa to Bactria,of Milesians to Ampe, near the Tigris, of Egyptians to Susa,of Eretrians from Eubœa to Ardericca, and to Gordyene, of Antiochians to Mahúza, and others which it would be tedious to specify.

H. W. Bellew[7] writes.... Herodotus gives some other instances of the transplanting of nations and tribes by king Darius after his return from the Skythian expedition. He says (Bk. v.) that, " Darius commanded Magabazus, whom he had left as his general in Thrakia, to remove the Paionoi from their abodes, and to bring to him themselves, their children, and their wives. "Magabazus accordingly

[Page-54]: invaded Paionia, and took- possession of their towns, and the Paionoi immediately gave themselves up to the Persians. Thus the Siropaionoi and Paioplai, and the tribes of the Paionoi as far as the Lake Prasias were removed from their abodes, and transported into Asia. But those about Mount Pangaius and near the Doberoi, the Agrianai, Odomantoi, and those who inhabit Lake Prasias itself, were not at all subdued by Megabazus. . . . Those of the Paionoi then who were subdued were taken to Asia. . . . Megabazus, leading with him the Paionoi, arrived at the Hellespont, and having crossed over from thence, came to Sardis, bringing the Paionoi with him. . . . The Paionoi, who had been carried away captive by Megabazus from the river Strymon, occupied a tract in Phrygia, and a village by themselves." The tribes named as thus transported into Phrygia are the Paioni, the Paioplai, and the Doberi.

Arrian[8] writes....Some of the Macedonians who served in Alexander's army had married just before he undertook the expedition. He thought that he ought not to treat these men with neglect, and therefore sent them back from Caria to spend the winter in Macedonia with their wives. He placed them under the command of Ptolemy, son of Seleucus, one of the royal body-guards, and of the two generals Coenus, son of Polemocrates, and Meleager, son of Neoptolemus, because they were also newly married. He gave these officers instructions to levy as many horse and foot soldiers as they could from the country, when they returned to him and brought back the men who had been sent away with them. By this act more than by any other Alexander acquired popularity among the Macedonians. He also sent Cleander, son of Polemocrates, to levy soldiers in Peloponnesus,[1] and Parmenio to Sardis, giving him the command of a regiment of the Cavalry Companions, the Thessalian cavalry, and the rest of the Grecian allies. He ordered him to take the wagons to Sardis and to advance from that place into Phrygia.