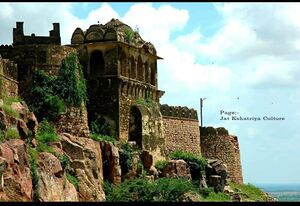 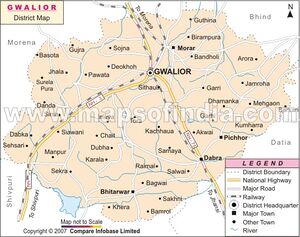 Location of Pichhore in Gwalior

Pichhore (पिछोर) is a town and site of Jat Fort of Donderiya Jats in Dabra tahil of Gwalior district in Madhya Pradesh. 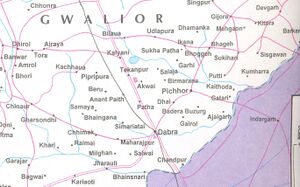 Location of Pichhore in Gwalior District 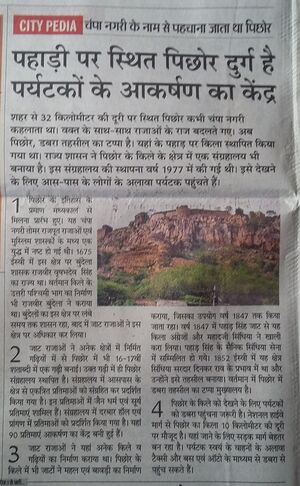 Various Jat clans had an important role in running the administration of Gohad state. The supreme power of the state vested in the King but the senior chieftains from Jat clans in-charge of various forts in the state used to keep a balance. For example Rao Baljoo of Neerpura was awarded with Jagir.

All the Jat clan chieftains had united to oppose the north India expedition of Marathas. [1]

Magrora fort was built by Maharaja Hamirjoodeo. Magrora state has been known for kind hearted rulers very popular amongst the public. Before the war with Mahadji Sindhia they were the rulers of Pichhore (Dabra).[2]

The Magrora state included Lohagarh, Magrora, Salvai, Patha, Ajaygarh ans Simaria garhis (forts). There were 25 garhis and 400 villages in this state. All these forts were built on high hillocks and well protected. After war with Mahadji Sindhia there was a treaty in which Pichhore ruler Maharaja Chhatra Singh was given the Magrora fort along with the title of Bahadur Joodeo. It was a free Jagir. [3]

The present fort at the northern end of the western ghats was built in 1675 AD by the Bundela ruler Rajaveer Vrashabh Dev Singh. The city earlier known as Champa Nagari, was destroyed in 1313 AD during a fierce battle between the Tomar and Rajput kings. Among the historical spots which still exist are the bungalow of Raja Bhoj, the tomb of Veer Jagat Singh in the Nageshwar mountains, Rasik Bihavi, the temple of Ganesh built in 1734, and a huge lake.

Like their Bambrolia Kinsmen in Gohad the Doderiyan Jats of Pichhore were also reluctant emigrants from the Punjab. About the year 1340 A.D. Raja Bhagirath founded a settlement around the village of Keo some 35 miles South East of Gwalior, which subsequently became famous as Pichhor. Raja Bhargirath had four sons, namely Chandermani, Sinhmani, Akshamani and Mado Singh.

Chandermani the eldest succeeded his father. On Chandermani's death, his only on Dhruve Angad became the ruler of Pichor. He started the building of Pichhor fort in 1448 which was completed by his son Raja Hamir Deo the First, whose reign partly coincided and probably overlapped the reign of the famous Tomar chief Raja Man Singh. Hamir Deo the First saw hard days in his conflicts with the chiefs of Narwar and Orchha. But by the very able stratagem of his wife Ganga Kumari he was able to overcome his problems and continued to rule Pichhore for many years and was probably still alive when Babar appeared on the Indian scene. After that there is a hiatus in the Doderiyan tradition.

During the rule of Hamir Deo the second, a contemporary of Shah Jahan I (1628-58 A.D.), the Pichor principality grew into a modest size. His just rule and martial exploits are to this day extolled by the itinerant bards of Northern Bundhel Khand. Hamir's sense of Justice is reputed to have led him to sentence his own beloved son to death for an unintentional misdemeanor in a hunting field.

Hamir Deo was succeeded by Raja Padam Singh, who ruled Pichhore during The greater part of Aurangzeb's reign. Padam Singh had two sons. Hindupati and Prithvipati. Hindupati was a reputed scholar and poet. He wrote a religions tract called Tattva-Bodha which is still extant. Hindupati was succeeded by his son Pahar Singh. During 1767, Pahar Singh had joined forces with Jawahar Singh or expelling the Maratha troops from the Bhind area and in the latter's expedition to Ajmer and Pushkar. However, about the year 1783-84 Pahar Singh had accepted a feudatory status under Mahadji Sindhia. Chhattar Singh the successor of Pahar Singh was treacherously deprived of Pichor by Daulat Rao Sindhia. His wife's blood stained palm impression in the citadel at Pichor still commemorates her exile from that ancient fortress.

back to Jat Villages