Punch in Jammu and Kashmir 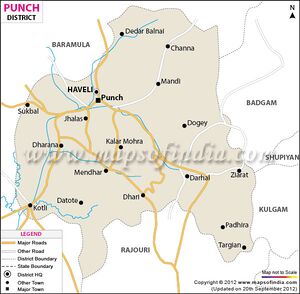 Poonch is located at 33.77°N 74.1°E. It has an average elevation of 981 metres. The Pir Panjal range of mountains separates Poonch Valley from the Kashmir Valley. For a long time the only road connection between the two valleys was from Jammu. But now with the completion of the Mughal Road connecting Bufliaz in Poonch to Shopian in Kashmir, there is a direct connection between the two.

It consist of 4 tehsils, Haveli, Mendhar, Surankote and Mandi.

V. S. Agrawala[4] writes that Ashtadhyayi of Panini mentions janapada Uśīnara (उशीनर) (IV.2.118) - Panini mentions Ushinara as part of Vahika. Panini mentions three divisions of Vahika Country, viz Kekaya, Uśīnara and Madra. Fourth division to be added to Vahika country is Śavasa. Of these Kekaya and Śavasa may be located between Jhelum and Chenab, the first in the south and second in north respectively; Madra and Ushinara between the Chenab and Ravi River in the north and south respectively.

The Divyadana refers to the Shvasas in Uttarapatha with headquarters at Takshasila to which Ashoka was deputed by his father Bindusara as Viceroy to quell their rebellion. The name of Savasa or Shvasa seems to be preserved in in the modern name Chhiba comprising of Punchh, Rajauri and Bhimbhara. In literature Ushinaras are often associated with the Śibis (greek - Siboi) whose chief town Śibipura has been identified with Shorkot in Jhang district.

Based on the Mahābhārata evidence,[5] and the evidence from the 7th-century Chinese traveler Xuanzang,[6] the districts of Poonch along with Rajauri and Abhisara were under the sway of the Republican Kambojas during epic times.[7][8][9][10][11]

Poonch has witnessed many historical eras. Around 326 BC when Alexander the Great invaded the lower Jhelum belt to fight with Porus, this region was known as Darvabhisara.

In the 7th Century AD, the famous Chinese traveller Huien Tsang passed through this area. According to his observation, this region was known as part of Kashmir also known as mini kashmir.

Around 850 AD Poonch became a sovereign state ruled by Raja Nar, who was basically a horse trader.

According to Rajatarangini, Raja Trilochan Pal of Poonch gave a tough fight to Mahmud of Ghazni, who invaded this area in 1020 A.D.

Visit by Xuanzang in 633 AD

[p.128]: The district of Puan-nu-tso, or Punacha, is placed by Hwen Thsang at 700 li, or 117 miles, to the south-west of Kashmir.1 It is called Punats by the Kashmiris, who have adopted a soft pronunciation of the ch, as in Pir Pantsal for Panchal of the Panjabis. Moorcroftf spells the name Prunch, or Pruntz, according to the Kashmiris. General Court also has Prunch ; but it is called Punje by Wilford's surveyor, Mirza Mogal Beg, and Punch by Vigne, both of whom actually visited the place. Its distance from Kashmir, as measured on the map via Barahmula and Uri is 75 miles, which is equal to about 100 miles of actual road distance.2

Hwen Thsang describes Punach as 2000 li, or 333 miles, in circuit, which is just about twice its actual size. On the west it is bounded by the Jhelam, on the north by the Pir Panchal range, and on the east and south-east by the small state of Rajaori. But these limits, which include the potty state of Kotali, are not more than 170 miles in circuit ; and even if the tract at the source of the Punach river be included, the frontier

[p.129]: will not be more than 200 miles in circuit. But as the distances in the mountain districts were most probably estimated by the lengths of the roads, the circuit of the frontier line may be taken as equivalent to about 300 miles in road distance.

In the seventh century Punach was without a king, and subject to Kashmir ; but in later times it had a chief of its own, whose descendants. Shir Jang Khan and Shams Khan, were put to death by Gulab Singh, of Jammu, and this petty sovereignty once more forms part of the kingdom of Kashmir.

Rajatarangini[15] tells ...Uchchala was reduced to much difficulty on the day of full moon in the month of chaitra, but on the fifth day of the dark moon he fearlessly set out for battle. He allowed Vattadeva and others to take their own course that they might create confusion in the kingdom. He intended to enter Kashmira by the way which led through Kramarajya. Kapila, grandson of Kshema, whom the king had placed at Lohara after Udayasiha, fled as Uchchala entered the place. Uchchala moved before his army with sword and shield, and arrived at Parnotsa, and there compelled the royal army to fly. He captured Sujjaka, Lord of Dvara, who was reposing at ease and apprehended no danger, and soon entered Kashmira. Some of the Damaras and the people of Khasha, who inhabited the mountains and who were enemies of the king, now joined Uchchala.[VII (i),p.268]

Rajatarangini[16] tells us ....The king Bhikshachara by taking away from Sujji his possessions plainly showed that he no longer felt for Sujji as he used to feel before. Sujji's followers became few and he himself apprehended evil. This proud man, thus insulted, went out of the capital with the bones of king Sussala in order to proceed to the river Ganges. Out of love for the king, Sujji asked his permission for undertaking this journey : and when he set out, neither the king nor his officers prevented his going. With a view to parade his pride, the Pratihara, when sending Sujji to exile, sent his own son to protect Sujji's wealth. It grieved Lakshmaka to find that the Pratihara thought that it rested with him to punish or to favor, so that the Pratihara sent his son as a protector. Lakshmaka returned from Dvara and went to Parnotsa without rising against the king ; and then drove Bhagika from the hills of Lohara. The Pratihara sent Prema, son of the (king's) nurse, to the king, and the king bestowed the possession of Kotta on him. Lakshmaka left Lohara and thereby removed the fear of the king, and spent the fierce summer season at Rajapuri. The king who had under him the Damaras, and could raise or put down the ministers like balls, appointed Lakshmaka at Dvara, in order to set up a rival to Sujji and also for the safety and dignity of his dynasty. Thus the king enviously believed that the valorous Sujji, born in this country and fed from his treasury, would deprive him of his glory. By this appointment at Dvara, Lakshmaka was made uneasy and became an object of ridicule. [VIII (i),p.140-141]