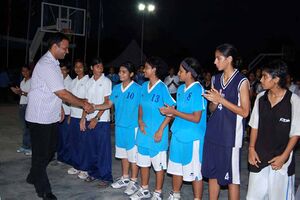 Raj Kumar Sangwan Born 20 Aug , 1969 in village Sahuwas , District Charkhi Dadri , Haryana, has won the Arjun Award in the year of 1996. He is the first Indian boxer who won the gold medal for India in Asian games in boxing. He is was also ranked 4th in 1995.

Soon after his gold medal at Asian Games , he entered in professional boxing at UK. He has been nick named Sugar in boxing world. Due to some family emergency he had to come back and retire from Professional Boxing. It is Raj Kumar Sangwan which inspired the present day Bhiwani boxers to took up this sport and make Bhiwani a little Cuba. He is General Secretary of All Indian Professional Boxing Fedaration. He is also the member of Chief selection committee for Boxing Federation of India. He is a helping figure to rising boxers and always a call available to all aspirants. Socially, he is known as generous person in and around his village.