Ragbhir Singh, the son and heir of Raja Sarup Singh, was in every way worthy of his father. He was, at this time, about thirty years of age, and had been thoroughly trained in judicial and administrative matters in which the late Raja was an excellent teacher ; for he had kept his territory in excellent order, and had been eminently just in his dealings with his subjects.

The installation of the new Chief took place on the 31st of March 1864, in presence of Sir Herbert Edwardes the Agent of the Lieutenant Governor ; the Maharaja of Pattiala ; the Raja of Nabha, the Nawab of Malerkotla, and many other Chiefs.†

The revolt of Dadri

The new Raja had scarcely taken his seat on the "gaddi" than a rebellion broke out in the newly acquired territory of Dadri, to test his energy and determination.§

The administration of late Nawab of Dadri :

The Nawab of Dadri had been, as a ruler, incompetent and entirely in the hands of his servants. He was accustomed to farm the revenue collections to the headmen of villages, sometimes for Rs. 80,000, sometimes for a lakh of rupees or a little more, while they doubled

the amount by extortion and oppression.

That of Raja of Jind:

When the Raja of Jhind took possession, a complete change was wrought in the system, a regular settlement was made after the English method, and the assessment was raised to rather above two lakhs of rupees. Raja Sarup Singh was notoriously fond of money and the new assessment was not a light one, but it was not oppressive. The British Government has adopted the policy of light assessment- a wise policy if not carried to a point where the revenue is sacrificed to sentimentality — but it cannot be expected that Native States will follow the example thus set. There is not a single State in India where the ruler does not take a far larger share of the produce of the land than the British Government, and it is natural that the border villages of native States should make unfavorable comparisons between their own condition and the prosperity enjoyed under British rule. But Raja Sarup Singh, although avaricious, was a wise ruler and popular, except in the neighbourhood of the town of Jhind where he was much disliked. He esteemed the people of Jhind the worst of his subjects, and lived away from them as much as he could, and often said that, in 1857, they were quite ready to rise against him if they had the opportunity. The assessment of Dadri, though far higher than would have been fixed by British officers, was not oppressive, nor was it as much as the sum really taken from the people under the Nawabs, though it was nominally more heavy.

The instigators of the rebellion

The real exciters of discontent is Dadri were headmen of villages, who found all their gains at an end and them-

selves reduced to the position of simple lumberdars. Besides these, Hakim Kasim Ali Khan, who has before been mentioned as a malcontent on account of the Raja having made a cash assessment of his jagir, instigated the revolt ; the Loharu State was favorable and help was promised from the Rajput border.

During the life time of Raja Sarup Singh the discontented villages did not dare to stir, but, on his death, above 50 villages broke into open revolt, the Police Station of Badrah was captured, and the Thanadar placed in confinement, while rude entrenchments were thrown up round some of the villages; arms and ammunition were received from the neighbouring territory of Sheikhawatti, Loharu and Khetri, and the famous Sheikhawatti robbers were summoned to help on promise of plunder and pay.

The energy of Raja

The Dadri people had made a great mistake when they fancied that the new Raja was less energetic than his father. Immediately on hearing of the rebellion, he left Jhind with two Regiments of Infantry, 1,500 strong, 350 Horse, and 4 guns, and marched to Dadri, which he reached on the 8th of May. He did not ask Pattiala or Nabha for the assistance which they were quite willing to give ; and politely declined the presence of a British officer in his camp, as he imagined that it might seem that he was unable to meet and overcome the first difficulty which he had experienced after ascending the throne.

He attacks the rebels and destroys their villages

On the 14th of May, the Raja, at day-break attacked the village of Charki, about 4 miles south west of Dadri, where

some 1,500 or 2,000 of the rebellious Jats had collected and entrenched themselves. They had been repeatedly warned, and several days had been allowed them to come in and make their submission, but they declared their determination to resist the Raja's authority to the last But when the attack really took place, and the guns opened on the village, the insurgents broke at once, and, in their flighty a good many were overtaken and cut up. The village was then burnt, and the Raja, the same day, marched against another, Mankind, six miles distant, which was captured and destroyed. The village of Jhanju was the last place at which the rebels made a stand, but it was taken by storm on the 16th of May, with a few casualties on both sides. It shared the fate of the two other villages, and the insurgents, finding their cause hopeless, fled to Rajputana territory and the rebellion was over.

The Raja was as merciful after his success as he had been energetic in action. He only punished the ring-leaders of the revolt, permitting the zamindars to return to Dadri territory and rebuild their ruined villages, and order has ever since been maintained in this part of the Jhind dominions.*

The family of Raja Raghbir Singh

Raja Raghbir Singh married, as his first wife, the daughter of Jowahir Singh, Chaudhri of Dadri. She bore him one son and a daughter. The former, Balbir Singh, is now fourteen years of age, and the girl was married to Sirdar Bishan Singh Kalsia in April 1865,

when wedding gifts to the value of Rs. 3000 were presented on the part of the British Government.*

The Raja married a second time in the family of Dhyan Singh, Gil, of Rajamajra, but there has been no issue of this marriage.

The principal residence of Raja Raghbir Singh is at Sangrur, but he does not neglect the administration of the distant parts of his estate. He is a man of excellent judgment and great honesty, and during the late minorities in Pattiala and Nabha, his advice has always been good, even if his young relatives have not always cared to follow it. The Raja is a keen sportsman and a brave soldier, and his little army of 1,500 men is in a state of great efficiency.

The revenue, area and population of Jhind State:

The Jhind territory is 1,236 square miles in extent with a population of about 3,50,000. The revenue has rapidly increased of late years, and is now between six and seven lakhs of rupees a year,

The neota or marriage present is quite optional ; there are very few precedents in favour of its being made, and it is only given as a token of the special favour of Government. 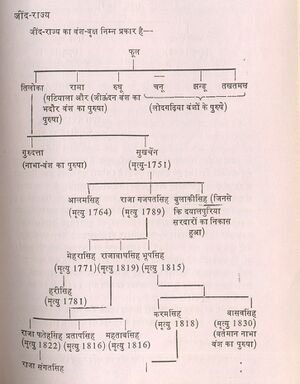 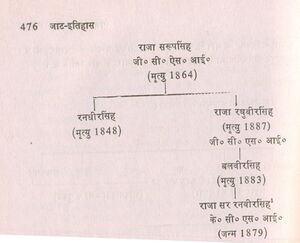