Note - Please click → Ranjeetpura for details of similarly named villages at other places. 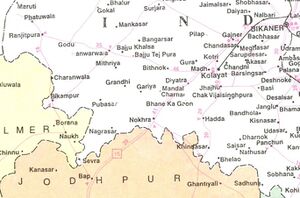 A statue of Rawat Ram Kaswan, Hawaldar and leading person in Dacoity eradication program, was installed at Chak 7, Choudhary Bros. 2 PCA Second, on 5 February 2007 . This was installed by Comrade Hanuman Chaudhary in memory of his services. Before 1947 Rawat Ram Kaswan was in Army. Later he joined the program of dacoity eradication and did a great service to humanity. [1]