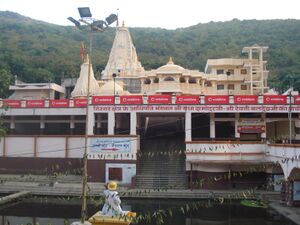 Revati (रेवती) was wife of Balarama, the elder brother of Krishna.

Revati was the only daughter of King Kakudmi (sometimes called Kakudmin, or Raivata), a powerful monarch who ruled Kusasthali, a prosperous and advanced kingdom under the sea, and who also controlled large tracts of land, including Anarta kingdom. Krishna had come to Dwarka on the invitation of Kakudmi.

Revati (रेवती) is mentioned by Panini in Ashtadhyayi. [1]

Revati bore her husband two sons, Nisatha and Ulmuka. Both her sons Nisatha and Ulmuka were killed in the Yadu fratricidal war, after which Balarama also ended his earthly incarnation in meditation by the sea. At his funeral ceremony, Revati ascended onto his funeral pyre and was immolated with him.

Her account is given within a number of Puranic texts such as the Mahābhārata and Bhagavata Purana.

Damodar Kund & Revati Kund - Built in 500 A.D., this often reconstructed kund (water reservoir) is a check dam. This kund is about a km before the bottom of Girnar Hill. It is a sacred bathing tank. Close to Damodara Kund is Revati Kund. It is said that Revata left Dwarka and moved near Girnar Hill after his daughter, Revati, married Lord Balarama.

The most astonishing claim made so far about historicity of Neminath was made following the discovery of a copperplate inscription found at Kathiawar, deciphered by Dr. Pran Nath. According to Dr. Pran Nath King Nebuchadnezzar I (Reign ca. 1126–1103 BC, Dynasty IV of Babylon) considered himself to be the Lord of Mt. Girnar (historically also known as Ujjayanta or Raivata or Revata) visited Mt. Raivata and paid homage to Neminath (or Arishtanemi), the paramount deity of Mt. Raivata. He also contributed a grant to build a temple in honor or Neminath.