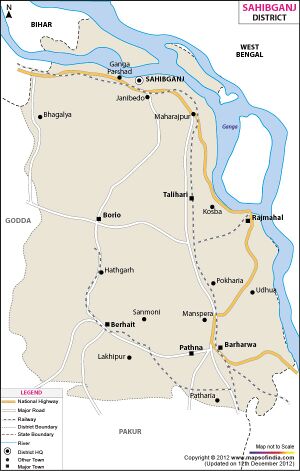 Sahibganj (साहिबगंज) (also known as or Sahebganj) is a town and district in Jharkhand state, India.

Sahibganj means a place (ganj) of masters (sahebs or sahibs).

Sahebganj is located at 25.25°N 87.65°E. It has an average elevation of 16 metres. Sahibganj is sandwiched between River Ganga on the north, Rajmahal Hills on the south, State of Bengal on the East and one of the world's oldest university, Vikramashila (in Bhagalpur District) of Bihar on the west.

The history of Sahibganj town centers mainly on the history of Rajmahal and Teliagarhi Fort. There is evidence in the pages of history that the area is inhabited since time immemorial only by Malers (Mal Paharia). They were the early settlers of the territory of Rajmahal hills, who still reside in some areas of the same hills. They are considered to be the “Malli” mentioned in the notes of Megasthenese, Greek Ambassador of Selukus Nikater, who happened to be in the vicinity of Rajmahal hills in 302 BC.

Till the visit of Chinese traveller Hiuen Tsang in 645 AD, the history of this area was wrapped in obscurity. In his travelogue the Chinese pilgrim mentions about the Fort of Teliagarhi (on the rail route, near Mirzachauki Railway Station), when he saw the lofty bricks and stone tower not far from the Ganges. Information is gathered through the pages of history that it was a Buddhist Vihar.

A continuous history of the district is available from the 13th century when Teliagarhi became the main gateway of Muslim armies marching to and from Bengal. During the Turkish dynasty rule in Delhi, Malik Ikhtiaruddin-bin-Bakhtiar Khilji marched towards Bengal and Assam through Teliagrahi pass. He captured Bengal and its king Lakshaman Sena fled away to Cooch Behar (in West Bengal).

In 1538, Sher Shah Suri and Humayun came face to face for a decisive battle near Teliagarhi. On 12 July 1576, the battle of Rajmahal was fought and the foundation of the Mughal rule in Bengal was laid.

It was Man Singh, the most trusted general of Akbar, who in the capacity of Viceroy of Bengal and Bihar made Rajmahal the capital of Bengal in 1592. But this honour of Rajmahal was short-lived, for the capital was shifted to Dacca in 1608.

Shortly after this, Teliagarhi and Rajmahal became the seat of a fierce battle between the rebellious Prince Shahjahan and Ibrahim Khan. Shahjahan emerged victorious and became the master of Bengal for the time being, losing finally in 1624 at Allahabad.

In 1639, Rajmahal regained its glory and was once more made the capital of Bengal by Shah Shuja, the second son of Emperor Shahjahan, on his appointment as the Viceroy of Bengal. It continued as the seat of the Mughal Viceroy up to 1660 and a mint town till 1661. It was at Rajmahal that Dr. Gabriel Boughten cured the daughter of Shah Shuja. By this means Dr. Boughten succeeded in securing an order (farman) from Shah Shuja giving the English the liberty to trade in Bengal. Thus the minutest foundation of the British rule was laid here. The fugitive Nawab of Bengal Siraj-ud- Daula was captured at Rajmahal during his flight after the Battle of Plassey in 1757.

The entire Santhal Pargana along with portions of the present Hazaribagh, Munger, Jamui, Lakhisarai, Begusarai, Saharsa, a part of Purnia and Bhagalpur, districts was termed as “Jungle Terai” by the English on assumption of Diwani in Sept. 1763 from Shah Alam II at Allahabad after the Allahabad Treaty.

The victory at Plassey made British master of the then Bengal which contained the present Sahibganj District. In Santhal Pargana, they were up against a band of simple but determined opponents, the Paharias. Paharias were great lovers of freedom and could not tolerate any intruder in their homeland. The English were very much concerned and Warren Hastings the Governor General of India organized a special corps of 800 men in 1772 to curb the Paharias. The corps was put under the command of Captain Brooke, who was appointed the Military Governor of the Jungle terai.

As a direct consequence of the Santhal Hul or Rebellion of 1854-55 led by Sido and Kanu brothers Santhal Pargana has been created as a separate district in 1855 by ceding portions of Bhagalpur (which is now in Bihar) and Birbhum (which is now in West Bengal) district.

The 1942 movement also spread to entire Santhal Pargana division, for that matter in Sahibganj and on 11 August 1942 a general strike was observed. On 12 August 1942 a procession was taken out at Godda and soon the entire district was aflame. Thus the district of Santhal Pargana marched hand-in-hand with other parts of the State in the protracted struggle for country's freedom which resulted on 15 August 1947 in the end of slavery.

Government considered the Paharias and other tribals of Rajmahal hills as demographically underdeveloped section of society and embarked on policies and plans for their emancipation. The Jharkhand Movement for separate statehood thus gained momentum and on 15 November 2000, a separate state named as Jharkhand came into existence comprising the 18 districts of the Chhota Nagpur and Santhal Pargana divisions.

The place is likely to have been given its name because a number of English and other European people lived and worked in and around the railway station during the British Raj.The town is cosmopolitan, with people from Bihar, Bengal, and Jharkhand; and refugees from Bangladesh and Pakistan.