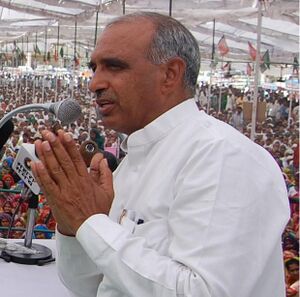 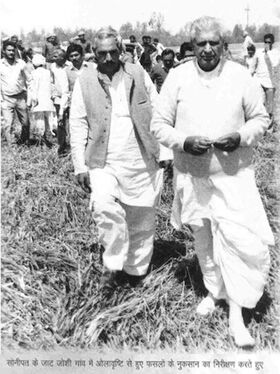 Prof Sampat Singh (Budania) (born 20th April 1949) is a vetern politician from Haryana and has handled many important portfolios as minister in state government. He was born at village Bhattu Kalan in Sirsa district. He is staunch follower of the policies of the great kisan leader Ch. Devi Lal. He has been one of the most important person in Haryana politics for many decades. He is known as mentor and member of think-tank among his party colleagues.

Political career of Prof Sampat Singh started when he met Chaudhary Devilal in Hisar in 1977. Tau ji had come to Hisar and was to leave for Delhi. Since, it was already lunch time, Prof Singh requested him to take lunch with him. Tauji agreed to it. When Tauji came to power, Prof Singh went to congratulate him. Prof Singh was appointed as Personal Secretary to Chief Minister ( Chaudhary Devilal). Prof Singh had no political ambitions and he was reluctant in taking the post. In 1979, when Tauji left his Bhattu Kalan seat for contesting Lok Sabha election from Sonepat, he offered Prof Singh to contest elections from Bhattu Kalan. He contested and won it. Prof Singh thereafter has never looked back.

Prof Singh has credit of defeating heavy weights in electoral fights, like "Mani Ram Godara". He has also contested and won from constituencies like Fatehabad and "Adampur". He gave a tough fight to Bhajan Lal in Adampur constituency in 2008 bye-election.

When he was Finance minister of the State, Haryana implemented various financial reforms initiated by Union Govt. and also that Haryana became the first state to implement V A T. As Home minister of the state during militancy times, he curbed the menace of terrorism in Haryana with a firm hand.

Active Role in Electricity Tariff Regulation in the state

Prof Sampat Singh is among a rare class of politicians who do not hesitate in raising concerns for common man's cause. He studies the topic and issue in depth before giving any public statement on it. He seems to have a great in depth knowledge of power sector and related matters in the state of Haryana. This is the reason that he has been instrumental in raising concerns against irregularities in the state power distribution companies viz DHBVN and UHBVN. These companies were trying to pass on the deficit to the state consumers and prof Sampat Singh, despite being the ruling party MLA, opposed it openly. Similarly, he raised concerns against privatization of power distibution in Gurgaon dist. He also raised concerns over appointment of retired and old officers in Haryana Electricity Regulatory Commission as members. On Feb 18th 2010, Prof Sampat Singh, who had been the single-most consistent voice against these companies, raised objections over the inclusion of the ARR of the two previous years in the revenue gaps being shown. Stating that he was not there as an MLA of a particular party, but as a consumer, he opposed the tariff hike and said fuel hike should be included in the ARR. This was allowed by the commission.

Sampat Singh urged the Haryana Electricity Regulatory Commission (HERC) to reject the power companies’ request to levy fuel surcharge on consumers. Sampat Singh, Congress MLA from Nalwa, said the fuel surcharge adjustment (FSA) should be exposed to public scrutiny as was the practice while deciding the annual revenue requirement (ARR). This, he said, would ensure transparency and answerability in the power corporations.The consumer had the right to know whether the companies were buying the power judiciously or wasting their money. Sampat Singh said had the companies been filing true ARR, there would have been no need to revise the power tariff. The companies had purchased 2,800 million units of power at an average rate of Rs 6 per unit in 2008-09, which was why fuel surcharge had been sought. Ironically, only 40 million units at an average of Rs 5 per unit had been proposed in 2009-10. This was a glaring example of the companies’ intention to suppress the costs in the ARR, he elaborated.

Prof Sampat Singh contested election from Hisar Lok Sabha Constituency on NDA ticket. He lost this election to Former Chief Minister Bhajan Lal with a narrow margin of 6,900 votes. It is alleged that INLD and HJC did an under-the-table agreement to ensure Bhajanlal's win from Hisar and Ajay's win from Bhiwani. Hence Prof Sampat Singh lost election just because of hidden alliance between Chautala and Bhajan Lal. This caused his supporters to be angry with INLD supremo. INLD was defeated in all LS seats in 2009 elections and in order to revive the party, Prof Sampat Singh enlisted 65 reasons for party's defeat. All the points were clearly showing the problems with party leadership and wrong decisions taken by Chautala and sons.

Professor Sampat Singh quit INLD on 14th July 2009 and held a meeting with his supporters and workers on 18th July 2009 in Hisar to chalk out further course of action. He joined Indian National Congress in Chandigarh on 28th July 2009 in the presence of Ch Bhupender Singh Hooda. Mr Hooda welcomed him by saying "Right person has come to right place in right time".

He fought for Hisar Lok sabha constituency in 2009 as INLD candidate and lost with a slender margin of votes. But in May 2014 General elections he had face a humiliation of forfeiting his security deposit in a multi corner contest in which he was a candidate from INC.

More about Prof Singh can be read on his official [website http://www.sampatsingh.in]

1981: State Youth Party President till 1984. Voluntary resigned at the age of 35years to make way for other youth members.

2008: By Election, Contested election from Adampur

2009: Contested Loksabha-2009 election from Hisar constituency and lost with a narrow margin of 6900 votes.

2009: (27 Jul) Prof Sampat Singh joined Indian National Congress party in Chandigarh. He was welcomed by Sh Bhupender Singh Hooda with words “The right man has come to the right party".

2009: (22nd Oct) Prof Sampat Singh won as Congress Candidate from Nalwa constituency in Hisar dist. With this, he has become 6 times legislator in state assembly. He defeated Bhajanlal's wife Jasma Devi with a huge margin of 10901 votes. Nalwa, considered to be a pocket borough of Bhajanlal, but Prof Sampat Singh's clean image came heavily on Bhajan lal's caste politics. It was first defeat of Bhajanlal clan in the state politics.

In mid-October 2019, Sampat resigned from Congress Party and joined BJP. This happened when he was denied ticket by Congress party for the Assembly elections in Haryana in October 2019.