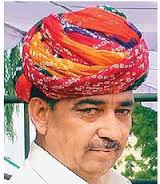 Sanwar Lal Jat (Lamba) (1 January 1955 - 9 August 2017) (सांवर लाल जाट) was a BJP politician from Rajasthan. He was a senior leader of state Bharatiya Janata Party. He is Ex. Minister in Modi Govt and Ex. President of Kishan Ayog Rajasthan.

He was a cabinet minister in Government of Rajasthan. He held portfolios of irrigation, Indira Gandhi Nahar Pariyojana, PHED, CAD, Ground Water Dev. He won election-2008 to Rajasthan Legislative Assembly from Bhinai in Ajmer district. He again won election-2013 from Naseerabad Assembly Constituency district Ajmer Rajasthan Legislative Assembly Elections. He was elected 2014 .....has been elected MP in 16th Lok Sabha (2014) from Barmer constituency as BJP candidate defeating Jaswant Singh by a margin of 87461 votes.

He got educated to M Com and Ph.D. He was a professor before joining politics. He is married to Narbada and they have two sons and a daughter.

Former Union minister and BJP parliamentarian Sanwar Lal Jat died at the All India Institute of Medical Sciences (AIIMS) in New Delhi early on Wednesday. He was 62.

The Rajasthan politician, who had served as the minister of state for water resources in the Narendra Modi government, breathed his last at 6.15 am after being in coma for over a week. He had suffered a cardiac arrest during a meeting chaired by BJP president Amit Shah in Jaipur on July 22.

A five-time MLA, Jat was a mass leader and a close confidant of Rajasthan chief minister Vasundhara Raje. Born in a peasant’s family at Ajmer’s Gopalpura village, the politician made his Lok Sabha debut in 2014 by defeating Rajasthan Congress president Sachin Pilot from Ajmer. Despite being appointed as a Union minister after that, he was dropped during a cabinet reshuffle.

Jat did not start his career as a politician. His first job – after completing his post-graduation in 1977 – was that of a supervisor with the Ajmer dairy. Later, he became a lecturer at the local government college.

Although Jat had been politically active since his college days, his first big breakthrough came only in 1990 – when he won his first assembly election from Bhinai on a Janata Dal ticket. When the party split the same year, he decided to join the BJP. In 1993, he was appointed as a minister of state with independent charge of relief and rehabilitation in the Bhairon Singh Shekhawat government.

Jat retained his seat in 1998 and 2003, and despite losing the polls in 2008, he made a comeback in December 2013 by winning from the Nasirabad constituency.

Jat, a man of humble disposition, could often be seen sitting with farmers in rural areas and listening to their problems intently. The chairman of the state farmers’ commission, he frequently raised rural issues – mostly related to agriculture – in the Rajasthan assembly.

The politician became the subject of a controversy in 2014, when chief minister Vasundhara Raje refused to drop him from the state cabinet even after he was elected to Parliament. He continued to hold the state water resources minister’s portfolio for many months, drawing protests from the Opposition.

Condolences began pouring in on Wednesday morning, after the news of his death became public. “Anguished by the demise of MP and former Union Minister Shri Sanwar Lal Jat. This is a big loss for the BJP & the nation. My condolences,” tweeted Prime Minister Narendra Modi.

Terming the politician’s demise as a “personal loss”, Raje tweeted in Hindi that his contribution to Rajasthan’s development will always be remembered. Pilot also took to the social networking site to express his “deepest condolences” to Jat’s family.

State BJP president Ashok Parnami hailed Jat as a farmers’ leader who had made an immense contribution to the state as MLA, MP and minister.

The former Union minister’s body was flown to Jaipur on Wednesday afternoon, after which it was kept at the state BJP headquarters for party activists and the general public to pay their condolences. He will be cremated at Gopalpura, his native village, on Thursday.